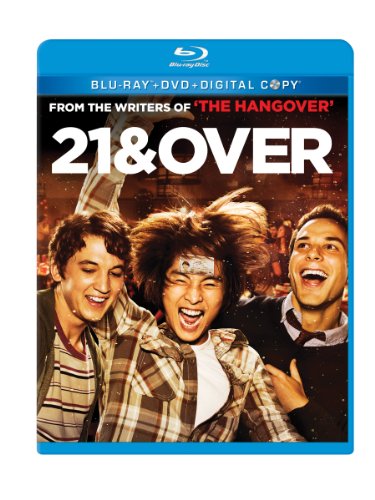 20th Century Fox Home Entertainment has announced the Blu-ray release for their coming of age comedy 21 & Over. The film is written and directed by Jon Lucas and Scott Moore and stars Miles Teller, Justin Chon, Skylar Astin, and Sarah Wright. 21 & Over will be available in stores and online beginning on June 18th.

21 & Over showcases a rite of passage gone horribly wrong. Straight-A college student Jeff Chang (Chon) has always done what’s expected of him. But when his two best friends Casey (Astin) and Miller (Teller) surprise him with a visit for his 21st birthday, he decides to do the unexpected for a change, even though his critical medical school interview is early the next morning. What was supposed to be one beer becomes one night of chaos, over indulgence and utter debauchery in this outrageous comedy.  François Chau, Jonathan Keltz, Daniel Booko, and Dustin Ybarra co-star in the film.

The Blu-ray will include several special features, including: Levels of Intoxication featurette; Tower of Power featurette; a gag reel; and a theatrical trailer.

Disclaimer: Affiliate links are contained in this post. This means when you click a link, and purchase an item, Movie House Memories will receive an affiliate commission. Advertisers and Affiliate Partnerships do not influence our content. See our Terms of Use about the inclusion of affiliate links on this site for more information.
April 25, 2013
1 minute read
Show More
Back to top button
Close
Close