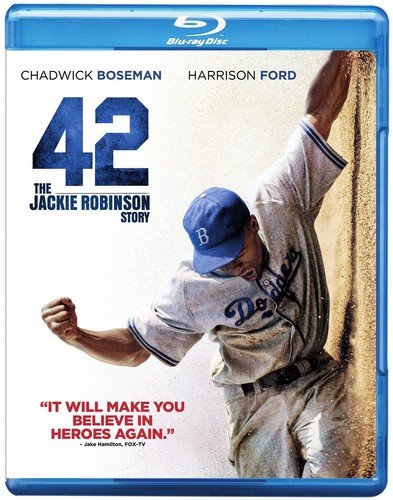 Warner Bros. Home Entertainment has announced the addition of the bio-drama 42 to their upcoming slate of Blu-ray releases. The film will be released in a Blu-ray/DVD/UltraViolet Combo Pack. The baseball drama is written and directed by Brian Helgeland and stars Chadwick Boseman, Harrison Ford, Alan Tudyk, Christopher Meloni, Lucas Black, John C. McGinley, andT.R. Knight. 42 will be available for purchase online and in stores beginning on July 16th.

42 stars Ford as the innovative Dodger’s general manager Branch Rickey, the MLB executive who first signed baseball great Jackie Robinson to the minors and then helped to bring him up to the show, and Boseman as Robinson, the heroic African American who was the first man to break the color line in the big leagues.

The Blu-ray/DVD/Ultraviolet Combo Pack will includes several special features, including: Stepping into History featurette; Full-Contact Baseball featurette; and The Legacy of the Number 42 featurette.