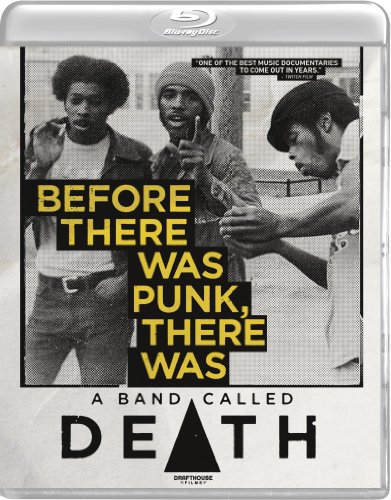 Image Entertainment has announced that it is adding the music documentary A Band Called Death to its upcoming slate of Blu-ray releases. The film was directed by Mark Christopher Covino and Jeff Howlett and details the emergence of Death, a failed 1970’s African American punk trio from Detroit that only gained popularity decades after disbanding. A Band Called Death will be available for purchase online and in stories beginning on August 13th.

Before Bad Brains, the Sex Pistols or even the Ramones, there was a band called Death. Punk before punk existed, three teenage brothers in the early ’70’s formed a band in their spare bedroom, began playing a few local gigs and even pressed a single in the hopes of getting signed. But this was the era of Motown and emerging disco. Record companies found Death’s music — and band name — too intimidating, and the group was never given a fair shot, disbanding before they even completed a single album.

Equal parts electrifying rockumentary and epic family love story, A Band Called Death chronicles the incredible fairy-tale journey of what happened almost three decades later, when a dusty 1974 demo tape made its way out of the attic and found an audience several generations younger. Playing music impossibly ahead of its time, Death is now being credited as the first black punk band (hell…the first punk band!), and are finally receiving their long overdue recognition as true rock pioneers. A Band Called Death will have a limited release in theaters beginning on June 28, 2013.

Image Entertainment has not released any details concerning the exact tech specs and special features that will be included with the disc.

Disclaimer: Affiliate links are contained in this post. This means when you click a link, and purchase an item, Movie House Memories will receive an affiliate commission. Advertisers and Affiliate Partnerships do not influence our content. See our Terms of Use about the inclusion of affiliate links on this site for more information.
June 7, 2013
346 1 minute read
Show More
Subscribe
Login
0 Comments
Inline Feedbacks
View all comments
Most Recent Posts
Facebook Twitter LinkedIn Tumblr Pinterest Reddit
Back to top button
Close
wpDiscuz
0
0
Would love your thoughts, please comment.x
()
x
| Reply
Close