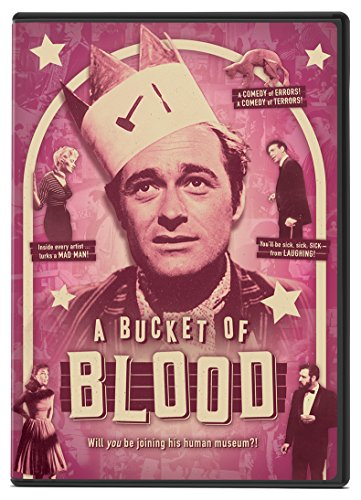 A Bucket of Blood

In the immortal words of Hippocrates, “Life is short, art long, opportunity fleeting …” Hippocrates was onto something.

A Bucket of Blood, directed by Roger Corman (The Trip), is the best of the genre hyphenates, a black-comedy-beatnik-culture-horror film. The masterful Corman (recipient of an honorary Academy Award® in 2010 for “his rich engendering of films and filmmakers”), often referred to as the Pope of Pop Culture, delivers on every level in a film packed with notable character actors including cult-favorite Dick Miller (The Trip, The Wild Angels) in the lead role of Walter, a busboy who dreams of creating the perfect work of art. Also featured are Barboura Morris (The Trip, The Haunted Palace) as Carla, the woman of Walter’s dreams, and Bert Convy (Semi-Tough) as undercover cop Lou Raby.

Influenced by the artists that circle his orbit at The Yellow Door Café, busboy Walter ventures into the world of sculpting where he can nurture the Rodin that lives inside of him. The downside is that his subjects are dead – by his hand. His beginnings, both humble and accidental, start with a small statue called “Dead Cat.” Unfortunately, “Dead Cat” is followed by “Murdered Man.” By the time we reach Walter’s interest in the female form …. well, you get the picture.

A Bucket of Blood is written by Charles B. Griffith (Death Race 2000), photographed by Jacques R. Marquette (Burnt Offerings), edited by Anthony Carras (The Comedy of Terrors), with music by Fred Katz (The Little Shop of Horrors) and art direction by Dan Haller (Pit and the Pendulum).