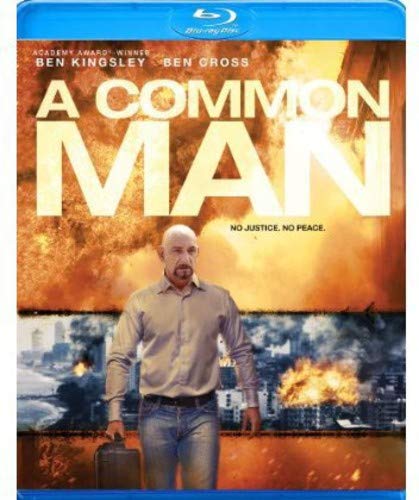 Anchor Bay Films has announced the Blu-ray release of writer/director Chandran Rutnam’s A Common Man. The film stars Ben Kingsley, Ben Cross, Patrick Rutnam, Frederick-James Lobato, and Numaya Siriwardena. The topical action thriller will have a limited release in select theaters and debut on Blu-ray online and in stores beginning on May 21st.

Our newspapers are filled with stories about them. The airwaves announce their actions on a daily basis. But who exactly is what we call a “terrorist?” While they share the same methods, do all terrorists have the same goal? Kingsley stars as a seemingly average citizen who plants five powerful bombs in different locations around a major international city and threatens to detonate them unless his sole unconditional demand is met: the simultaneous release of four of the most deadly international terrorists from government prisons. In an urban landscape already gripped by fear, what could be the real motive behind a cunning madman’s ultimate plan?

A Common Man has been named a finalist at this year’s New York Festival. The screenplay was written by Rutnam, from the story by Neeraj Pandy.

The film features Dolby TrueHD 5.1 audio. Anchor Bay Films has not released any details concerning the special features that will be included with the disc.

Disclaimer: Affiliate links are contained in this post. This means when you click a link, and purchase an item, Movie House Memories will receive an affiliate commission. Advertisers and Affiliate Partnerships do not influence our content. See our Terms of Use about the inclusion of affiliate links on this site for more information.
May 12, 2013
1 minute read
Show More
Back to top button
Close
Close