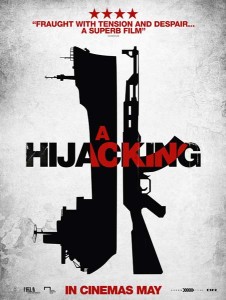 Magnolia Pictures has released a trailer for their upcoming thriller A Hijacking (Kapringen). The film is written and directed by Tobias Lindholm and stars Pilou Asbæk, Søren Malling, Dar Salim, and Roland Møller. The Danish drama is scheduled for a limited release in theaters on June 21st.

In the film, the cargo ship MV Rozen is heading for harbor when it is hijacked by Somali pirates in the Indian Ocean. Amongst the men on board are the ship’s cook Mikkel and the engineer Jan, who along with the rest of the seamen are taken hostage in a cynical game of life and death. With the demand for a ransom of millions of dollars a psychological drama unfolds between the CEO of the shipping company and the Somali pirates.

Theatrical trailer for A Hijacking  courtesy of The JoBlo Movie Network