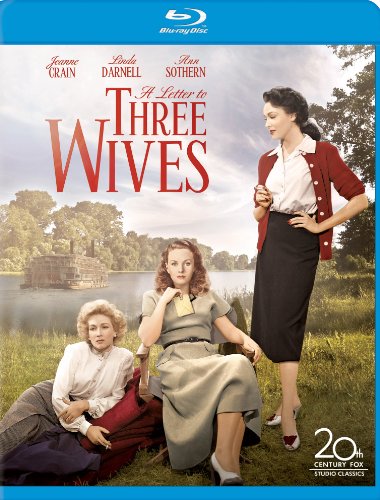 20th Century Fox Home Entertainment has announced the addition of the romantic drama A Letter To Three Wives to their upcoming slate of Blu-ray releases. The film was directed by Joseph L. Mankiewicz and starred Jeanne Crain, Linda Darnell, Ann Sothern, Kirk Douglas, and Paul Douglas. A Letter To Three Wives is currently available for pre-order online and will be available for purchase everywhere on September 17th.

As three women head off on a boating trip with a group of children, they receive a letter written by a woman claiming to have stolen one of their husbands. Which one? The letter doesn’t say. Faced with the prospect of a shattered life, each woman soul searches throughout the day: Deborah Bishop (Crain) feels inadequate amidst her husband’s (Jeffrey Lynn) country club set. Everyone sees Lora Mae Hollingsway (Darnell) as a gold digger, including her husband (Paul Douglas). And Rita Phipps (Sothern) has a career that makes her husband (Douglas) feel neglected to the point of infidelity. All three endure the anguish of uncertainty until the boat trip ends – and the truth is revealed.

Disclaimer: Affiliate links are contained in this post. This means when you click a link, and purchase an item, Movie House Memories will receive an affiliate commission. Advertisers and Affiliate Partnerships do not influence our content. See our Terms of Use about the inclusion of affiliate links on this site for more information.
August 10, 2013
354 1 minute read
Show More
Subscribe
Login
0 Comments
Inline Feedbacks
View all comments
Most Recent Posts
Facebook Twitter LinkedIn Tumblr Pinterest Reddit
Back to top button
Close
wpDiscuz
0
0
Would love your thoughts, please comment.x
()
x
| Reply
Close