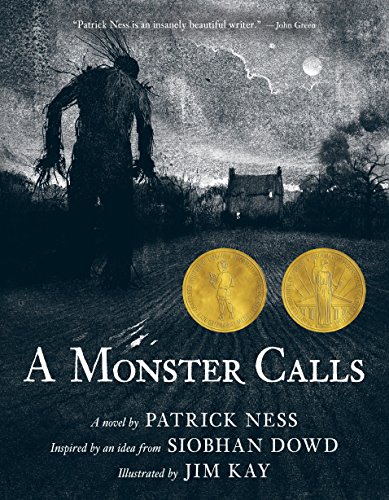 A Monster Calls: Inspired by an idea from Siobhan Dowd

An unflinching, darkly funny, and deeply moving story of a boy, his seriously ill mother, and an unexpected monstrous visitor.

At seven minutes past midnight, thirteen-year-old Conor wakes to find a monster outside his bedroom window. But it isn’t the monster Conor’s been expecting– he’s been expecting the one from his nightmare, the nightmare he’s had nearly every night since his mother started her treatments. The monster in his backyard is different. It’s ancient. And wild. And it wants something from Conor. Something terrible and dangerous. It wants the truth. From the final idea of award-winning author Siobhan Dowd– whose premature death from cancer prevented her from writing it herself– Patrick Ness has spun a haunting and darkly funny novel of mischief, loss, and monsters both real and imagined.

Affiliate links contained in this post will take you to Amazon.com. This means when you click a link, and purchase an item, the MHM Podcast Network will receive an affiliate commission. When you use these links, MHM gets credit regardless of what you purchase, or from what country you order. Best of all, you don’t pay a penny more! Advertisers and Affiliate Partnerships do not influence our content. See our Terms of Use about the inclusion of affiliate links on this site for more information.
April 1, 2014
0 147 1 minute read
Show More
Share
Facebook Twitter LinkedIn Tumblr Pinterest Reddit Skype Messenger Messenger WhatsApp Share via Email Print