In the film that made him a star, Jim Carrey stars as Ace Ventura, the world’s only pet detective. Ace is called into the investigate the disappearance of the Miami Dolphins’ team mascot, the bottlenose dolphin known as Snowflake. Ace struggles to find not only a suspect, but a motive for the crime. However, when he turns his attention to investigating the Dolphins organization itself, things become much more serious when the Dolphins’ starting quarterback, Dan Marino, is suddenly kidnapped as well. Now Ace must not only find the dolphin, but the king of the Dolphins as well. 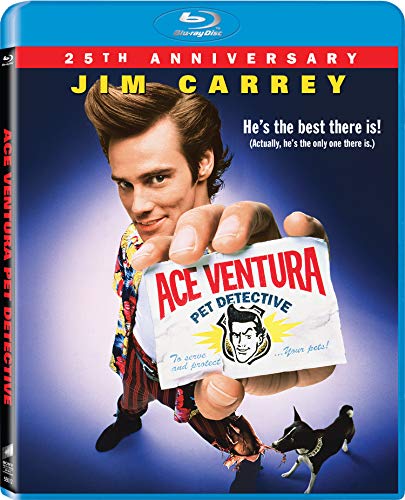 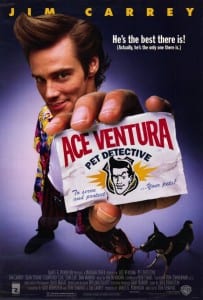 Ace Ventura (Jim Carrey) is a Miami based private detective who specializes in investigating cases involving animals. As the film opens, Ace impersonates a delivery man to steal back a small shih tzu from a man (Randall “Tex” Cobb) who stole the dog from his soon to be ex-wife (Rebecca Ferratti). Ace does not get paid, but he does get to have sex with the wife. Due to his unusual payment options, Ace struggles to pay his rent to his landlord Mr. Shickadance (Mark Margolis).

Not long after, Ace is brought into to investigate the kidnapping of the Miami Dolphins’ team mascot, the bottlenose dolphin named Snowflake. The Dolphins’ chief publicist Melissa Robinson (Courteney Cox) hires Ace to find Snowflake and informs him that the dolphin’s disappearance just two weeks before the Dolphins are to play in the Super Bowl could be a publicity nightmare.

Ace begins his investigation by going to the Miami Police Department to learn what law enforcement has uncovered. Ace talks to his only friend at the Police Department, Detective Emilio (Tone Loc), who tells the pet detective that the police have no leads as to the culprits. While at the police department, Ace gets into confrontations with both Sergeant Aguado (John Capodice) and Lieutenant Lois Einhorn (Sean Young). Assured that he can learn nothing from law enforcement, Ace heads back to the Dolphin facility to look for clues.

While there, Ace questions Melissa and the team’s head of operations, Roger Podacter (Troy Evans). They allow him to examine Snowflake’s tank for clues. Ace finds a rare triangle-cut orange amber stone but is unsure what the stone goes to. Ace begins looking into Dolphin fan and billionaire Ronald Camp (Udo Kier) as a possible suspect. Through his sources, Ace learns that Camp is known for collecting exotic animals through less-than-reputable means and sources. He also learns that Camp has recently purchased items that could be used for a large water tank.

If I’m not back in five minutes… just wait longer. Ace Ventura

Camp hosts a party, and Ace has Melissa sneak him into the party so he can snoop around. Ace finds a large water tank on Camp’s property. However, the tank contains a large shark that Ace barely escapes from with his life. Camp apologizes to Ace for the mishap and when he shakes Ace’s hand, Ace sees that he has a ring with a similar amber stone as the one he found in the filter of Snowflake’s tank. However, Camp is not missing his stone, so Ace rules him out as a suspect. Ace is informed that the triangle-cut stone was part of a 1984 AFC Championship ring.

Ace concludes that a member of the 1984 Miami Dolphins line-up is likely the suspect that kidnapped Snowflake. He sets out to identify the culprit by examining the rings of all former players. However, he discovers that all the team members’ rings are intact after a several bizarre encounters.

Shortly afterwards, Podacter mysteriously dies after falling from his apartment balcony. Einhorn declares it a suicide, but Ace embarrasses the police lieutenant by proving that it was murder due to the balcony glass doors being soundproof. Not long after, Ace comes across an old photograph of the 1984 Dolphin team that includes a player that Ace was unaware of, kicker Ray Finkle. Melissa explains that Finkle was added mid-season and would have received a ring as part of the team. She also tells Ace that Finkle was the one who missed the field goal that cost the Dolphins the Super Bowl. Finkle’s career never recovered after that game.

Ace begins looking into Finkle and travels to the Everglades to visit Finkle’s parents (Bill Zuckert and Alice Drummond). They inform Ace that they have not seen Finkle in years. Ace also examines Finkle’s bedroom and learns that Finkle blamed Dan Marino (Dan Marino) for the missed kick, specifically for placing the ball incorrectly. Ace also learns that Finkle was committed to a mental hospital for homicidal tendencies shortly before he disappeared.

Marino himself is kidnapped shortly thereafter. Ace visits Einhorn at the station and informs her of his theory concerning Finkle’s involvement in both kidnappings. Ace believes that Finkle hated that Snowflake was given his old number and performed a field goal trick as the mascot. Ace tells the lieutenant that he believes Finkle murdered Podacter as well after the Dolphin employee discovered him snooping around his apartment. Einhorn congratulates Ace on his hard work and kisses him.

Not long afterwards, Ace continues his investigation by having Melissa commit him to the same mental hospital that Finkle was placed. Ace uncovers a newspaper article in Finkle’s abandoned possessions about a missing hiker named Lois Einhorn. Ace is initially perplexed by the connection between Finkle and Einhorn, but eventually concludes that Einhorn is Finkle. Finkle took on the identity of the missing Einhorn, had sex reassignment surgery, and took advantage of her position in the police department to get revenge on Marino and the Dolphins.

On Super Bowl Sunday, Ace follows Einhorn from her home to an abandoned yacht storage facility. Ace discovers that Einhorn has hidden both Snowflake and Marino at the facility. Einhorn turns the tables on Ace by calling the police and blaming Ace for the kidnappings. Einhorn intends to kill Marino, the only witness who can exonerate Ace. Melissa and Emilio stage a hostage situation to get the police to listen to Ace. Ace strips Einhorn down in front of the police force, but she appears to be female despite Ace’s show. Marino points out to Ace that Einhorn still has her male genitalia that she keeps tucked between her legs. It is revealed that Podacter learned Einhorn’s true identity during a date with the lieutenant and she pushed him off the balcony to keep him quiet.

Einhorn is arrested by the police after trying to attack Ace. Her ring is confirmed to have a missing stone as well. Ace drives Marino to the Super Bowl, and Snowflake performs his field goal trick during the half time show. Ace is shown on the stadium’s jumbotron and acknowledged as the team’s savior just as he is beating up the team mascot on the field.