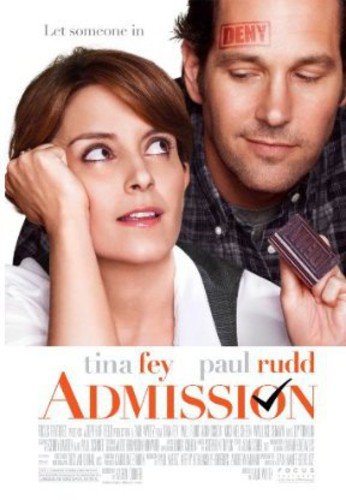 Karen Croner wrote the screenplay based on story by Jean Hanff Korelitz. Admission will be available online and in stores beginning on July 9th.

Admission tells the story of straight-laced Princeton University admissions officer Portia Nathan (Fey), who is caught off-guard when she makes a recruiting visit to an alternative high school overseen by her former college classmate, the free-wheeling John Pressman (Rudd). Pressman has surmised that Jeremiah (Wolff), his gifted yet very unconventional student, might well be the son that Portia secretly gave up for adoption many years ago. Soon, Portia finds herself bending the rules for Jeremiah, putting at risk the life she thought she always wanted — but in the process finding her way to a surprising and exhilarating life and romance she never dreamed of having. Gloria Reuben, Wallace Shawn, and Lily Tomlin also star.

Admission was released in March of 2013 and grossed over $17 million at the box office to date.

The Blu-ray release of Admission features 1080p video, a DTS-HD Master Audio 5.1 surround track, and both a DVD and UltraViolet digital copy of the film (expires 4/30/2015). Extras include a Early Admission with Tina Fey & Paul Rudd featurette.

Disclaimer: Affiliate links are contained in this post. This means when you click a link, and purchase an item, Movie House Memories will receive an affiliate commission. Advertisers and Affiliate Partnerships do not influence our content. See our Terms of Use about the inclusion of affiliate links on this site for more information.
May 11, 2013
1 minute read
Show More
Back to top button
Close
Close