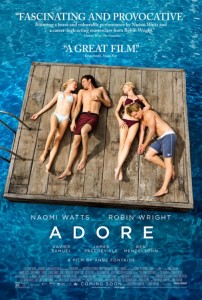 Exclusive Releasing has released a new theatrical trailer for the drama Adore. The film, which had previously been titled Two Mothers, is directed by Anne Fontaine and stars Naomi Watts, Robin Wright, Xavier Samuel, Ben Mendelsohn, and James Frecheville. Adore is currently scheduled for a limited release in the United States on September 9, 2013. The film was shown at this year’s Sundance Film Festival.

Watts and Wright deliver riveting performances in the Adore, a sensual and provocative drama about two lifelong friends who find unexpected happiness in relationships that cross the bounds of convention. An unpredictable tale of misguided love and a heartfelt celebration of the enduring nature of female friendship, the film is the English-speaking directorial debut of Fontaine. Set in an Australian seaside town, Adore establishes an aura of fable as it follows two women’s plunge into uncharted waters. Watts and Wright fearlessly engage with the physical and psychological components of the story, capturing the complex emotions and powerful desires driving their characters. The film radiates with intoxicating sensuality while exploring the intricacies of love, family, morality and passion. Christopher Hampton adapted the screenplay from a novel by Doris Lessing.

This Is The End – Green Band Trailer #2

This Is The End – Green Band Trailer #2