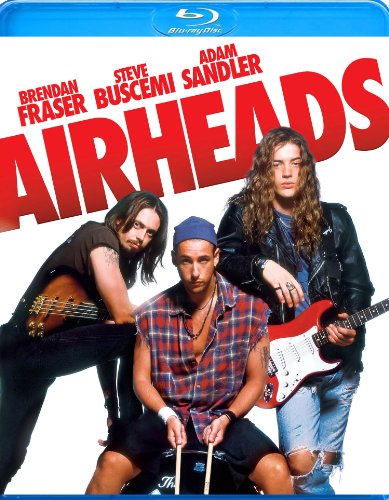 Anchor Bay has announced that they are releasing 20th Century Fox Home Entertainment’s Airheads onto Blu-ray this May. The film is directed by Michael Lehmann and stars Brendan Fraser, Steve Buscemi, Adam Sandler, Joe Mantegna, Michael McKean, Michael Richards, Chris Farley, and Judd Nelson. Airheads will be available online and in stores beginning May 28th.

In this hilarious spoof of the music industry, three intelligence-challenged rock ‘n’ rollers — Chazz (Fraser), Rex (Buscemi) and Pip (Sandler) — decide to take drastic action after their music continually falls on deaf ears. They break into a radio station, hoping to get their demo played on the air. But when the deejay (Mantegna) and station manager (McKean) refuse to play their song, the boys have no choice but to take the entire radio station hostage.

Airheads was released in August of 1994 and grossed over $5 million at the box office.

Disclaimer: Affiliate links are contained in this post. This means when you click a link, and purchase an item, Movie House Memories will receive an affiliate commission. Advertisers and Affiliate Partnerships do not influence our content. See our Terms of Use about the inclusion of affiliate links on this site for more information.
April 6, 2013
1 minute read
Show More
Back to top button
Close
Close