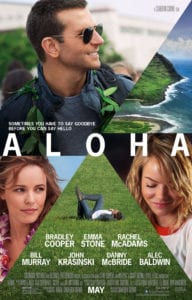 Master storyteller forgot the most important ingredient – the STORY!!

First thing — I LOVE Cameron Crowe movies. His insight into human interaction and interesting story lines is rarely duplicated in Hollywood. He’s one of the best at his craft of writing and directing. “Fast Times at Ridgemont High”, “Jerry Maguire”, “Almost Famous”, “We Bought A Zoo”… The thing you notice most about those incredible movies is how insightful and genuine the flow of language is between characters. It moves the story forward and gives each character depth and purpose to the story. The reason I bought “Aloha” on Blu Ray was for the very reason I saw “A Cameron Crowe Film” on the cover. That’s all I needed – even though I’m decidedly NOT a Bradley Cooper fan I was hopeful this could change my mind.

Imagine my surprise when I sat down and watched this “story” of an ex-Navy superstar test pilot turned jaded aviation contractor who sold his soul to the highest bidder – burning all bridges behind him in the process. But he’s hit rock bottom with one last chance. He heads back to Hawaii to work a deal to send a private satellite into space using Hawaiian land.

People in Hawaii are fairly laid back, but come on. Where to begin?… Emma Stone, whom I love, is woefully miscast – and her character goes through all kinds of crazy changes that have no explanation or logic. John Krasinsky has two very memorable, funny (the only humor in the movie) scenes where he doesn’t speak but much is said in the story through movement and facial expression. Adorable Rachel McAdams tried with her part and did an admirable job. Danielle Rose Russell was excellent as the daughter and the best part of the movie – and she’s in it for a total of about 10 minutes.

Let’s see how many characters were wrecked by Bradley Cooper’s acidic character:

— And all this garbage is perfectly tied up in the final 5 minutes with warmth and love all around. But in the end HE is the better person because of it and everything is forgiven. Smiles and hugs for the hero. Cue the angels singing… It’s like the writer caricatured characters so the narrative continued because Bradley Cooper wouldn’t be a complete jack-ass in the end instead of making real people act like real people would when a lying backstabbing low-life double-crosses everyone. Stereotype much? This movie insults our intelligence. Who green-lighted this mess???

If it seems like this review rambles on and on and doesn’t really go anywhere, welcome to “Aloha”. That’s the feeling you will get. There’s no coherent direction other than for the self-absorbed lead character. Everyone else turns to ash after they’re done in a scene with him. It’s a hollow attempt to show reconciliation and redemption for an unredeemable character by ruining other characters and their family relationships to make this “story” come to it’s unmerciful ending.

And I say unmerciful because: a) an innocent, unknowing CHILD has some visitor of all of one week show up at her hula recital and leer at her until, oh, wait for it, oh yeah! You’re my DAD!!!!-moment. No, that isn’t creepy or off-putting when she was just fine not knowing; b) the jerk, soulless contractor who just crossed and double-crossed the kingdom of Hawaii, the military AND a multi-billionaire, gets the girl??? WTH??? Like I said, I’m not a Bradley Cooper fan. I think he’s a smart-enough, spoiled, pretty boy who gets GREAT roles but never plays them honestly. In my opinion, he’s exactly the same immoral, narcissistic person/actor as his character in “Wedding Crashers” where the outside is beautiful and perfect, but the inside is empty and hollow – only for real. This character shows who the actor really is. And it’s nothing I’d like to see again.

This movie is pretty. So is a documentary on life in Hawaii. You’d get more out of the documentary. I’m only giving this a 3 because of a couple good actors playing in thankless jobs and the scenery. Otherwise, I’d give it a 1. And I rarely give anything less than a 5. The IMDb.com rating is too high. Watch something else.

Aloha [Blu-ray]
$7.99
$14.99
in stock
37 new from $3.15
52 used from $2.19
as of August 10, 2022 3:36 am
BUY NOW
Amazon.com
Last updated on August 10, 2022 3:36 am
Disclaimer: Affiliate links contained in this post will take you to Amazon.com and/or the iTunes Store. This Means when you click a link, and purchase an item, the MHM Podcast Network will receive an affiliate commission. Advertisers and Affiliate Partnerships do not influence our content. See our Terms of Use about the inclusion of affiliate links on this site for more information.

A celebrated military contractor returns to the site of his greatest career triumphs and reconnects with a long-ago love while unexpectedly falling for the hard-charging Air Force watch-dog assigned to him.