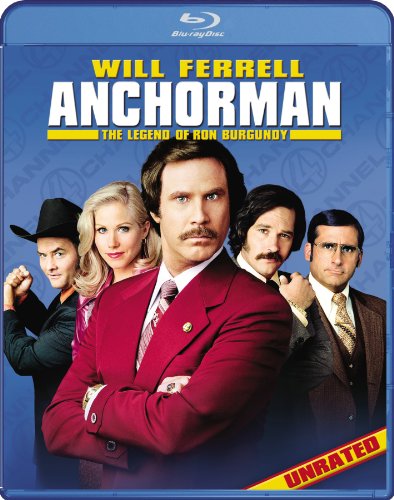 Dreamworks Video released an unrated version of Anchorman: The Legend of Ron Burgundy to Blu-ray on March 15, 2011. Adam McKay directed the film starring Will Ferrell, Christina Applegate, and Steve Carell.

In the 1970’s, Ron Burgundy is the top-rated anchorman in San Diego and has all the trappings of a famous television personality. However, feminism marches into the newsroom in the form of ambitious newswoman Veronica Corningstone and throws Ron’s world off kilter. Ron is willing to play along at first-as long as Veronica stays in her place, covering cat fashion shows, cooking, and other “female” interests. But when Veronica refuses to settle for being eye candy and steps behind the news desk, it’s more than a battle between two perfectly coiffed anchor-persons… its war.