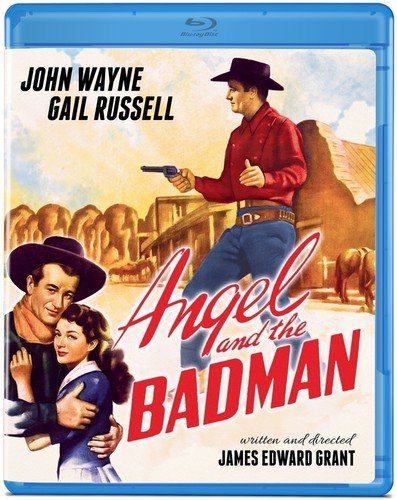 Angel and the Badman [Blu-ray]

Olive Films has announced that addition of the romantic western Angel and the Badman to their upcoming slate of Blu-ray releases. The film was written and directed by James Edward Grant and starred John Wayne, Gail Russell, Harry Carey, Bruce Cabot, and Lee Dixon. Angel and the Badman will be available for purchase online and in stores beginning on July 30th.

In the film, when Quirt Evans (Wayne) is wounded outside the home of a Quaker family, he is taken in and nursed back to health, with particular attention paid to him by their sheltered yet attractive daughter. Evans is enticed by the family’s pacifist ways, but his outlaw past soon catches up with him. This is the first Western made by Wayne in the role of producer, after the studio set him up with his own production company. Angel and the Badman was released in February of 1947.

Disclaimer: Affiliate links are contained in this post. This means when you click a link, and purchase an item, Movie House Memories will receive an affiliate commission. Advertisers and Affiliate Partnerships do not influence our content. See our Terms of Use about the inclusion of affiliate links on this site for more information.
June 23, 2013
444 1 minute read
Show More
Subscribe
Login
0 Comments
Inline Feedbacks
View all comments
Most Recent Posts
Facebook Twitter LinkedIn Tumblr Pinterest Reddit
Back to top button
Close
wpDiscuz
0
0
Would love your thoughts, please comment.x
()
x
| Reply
Close