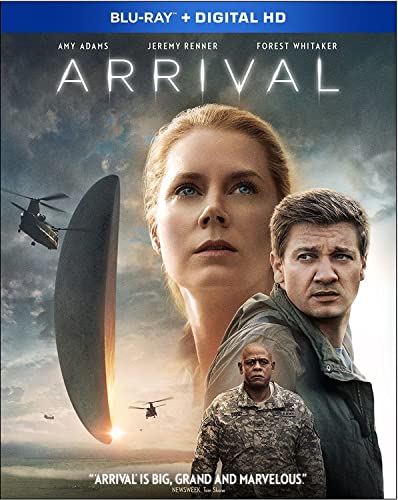 On February 14, 2017, Paramount Pictures released Arrival on Blu-ray, Digital HD, and UltraViolet. Denis Villeneuve directed the sci-fi/thriller which starred Amy Adams, Jeremy Renner, and Forest Whitaker. Arrival was released on November 11, 2016, and grossed over $193.1 million at the box office to date.

When mysterious spacecrafts touch down across the globe, an elite team – lead by expert linguist Louise Banks (Amy Adams) – is brought together to investigate. As mankind teeters on the verge of global war, Banks and the team race against time for answers – and to find them, she will take a chance that could threaten her life, and quite possibly humanity.

Arrival has been named one of the best films of the year by the American Film Institute, National Board of Review, New York Times, USA Today and many more. In addition, Adams was named Best Actress by the National Board of Review and received Golden Globe and SAG nominations for her performance. Screenwriter Eric Heisserer has won the Critics’ Choice Award for Best Adapted Screenplay and received a Writer’s Guild nomination.

Affiliate links contained in this post will take you to Amazon.com. This means when you click a link, and purchase an item, the MHM Podcast Network will receive an affiliate commission. When you use these links MHM gets credit regardless of what you purchase, or from what country you order. Best of all, it doesn’t cost you a penny more! Advertisers and Affiliate Partnerships do not influence our content. See our Terms of Use about the inclusion of affiliate links on this site for more information.
February 14, 2017
426 1 minute read
Show More
Subscribe
Login
0 Comments
Inline Feedbacks
View all comments
Most Recent Posts
Facebook Twitter LinkedIn Tumblr Pinterest Reddit
Back to top button
Close
wpDiscuz
0
0
Would love your thoughts, please comment.x
()
x
| Reply
Close