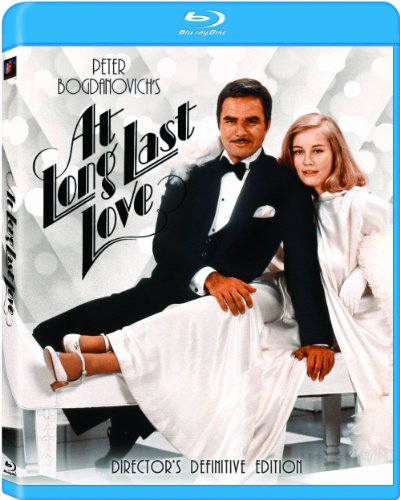 20th Century Fox Home Entertainment has officially announced and detailed the upcoming Blu-ray release of At Long Last Love. The film was written and directed by Peter Bogdanovich and starred Burt Reynolds, Cybill Shepherd, Madeline Kahn, Eileen Brennan, and John Hillerman. The musical comedy will be available for purchase online and in stores beginning on June 4th.

At Long Last Love is a charming pastiche of superb Cole Porter songs woven together to tell a gossamer tale of life among the idle rich. The romantic roundelay is peopled by a carefree playboy (Reynolds), a madcap heiress (Shepherd), a Broadway diva (Kahn), and an Italian gambler (Duilio Del Prete); with a pair of wised-up servants (Hillerman and Brennan) providing little perspective. Released just in time for Cole Porter’s birthday on June 9, the film features stunning 1930’s-inspired, black-and-white-in-color design, and is presented here in the director’s preferred cut which was personally overseen by Bogdanovich.

At Long Last Love was released in March of 1975 and grossed over $1.5 million at the box office.

The Blu-ray will includes several special features, including: an isolated score track, the original theatrical trailer, and an 8-page booklet on the background of the film.

Disclaimer: Affiliate links are contained in this post. This means when you click a link, and purchase an item, Movie House Memories will receive an affiliate commission. Advertisers and Affiliate Partnerships do not influence our content. See our Terms of Use about the inclusion of affiliate links on this site for more information.
June 3, 2013
1 minute read
Show More
Back to top button
Close
Close