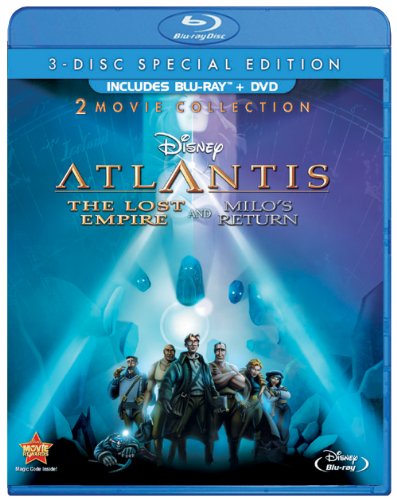 Walt Disney Home Entertainment has announced that they are adding Atlantis: The Lost Empire to their upcoming slate of Blu-ray releases. The film was directed by Gary Trousdale and Kirk Wise and stars John Mahoney, Corey Burton, Phil Morris, Jacqueline Obradors, Cree Summer, and Michael J. Fox. Atlantis: The Lost Empire will be available in stores and online June 11, 2013.

In Atlantis: The Lost Empire, a young adventurer named Milo Thatch joins an intrepid group of explorers to find the mysterious lost continent of Atlantis. In Atlantis: Milo’s Return, Milo and Kida reunite with their friends to investigate strange occurances around the world that seem to have links to the secrets of Atlantis.

Atlantis: The Lost Empire is bundled with Atlantis: Milo’s Return on a single BD-50 disc, in 1080p with lossless DTS-HD Master Audio 5.1 surround tracks. Extras include:

Disclaimer: Affiliate links are contained in this post. This means when you click a link, and purchase an item, Movie House Memories will receive an affiliate commission. Advertisers and Affiliate Partnerships do not influence our content. See our Terms of Use about the inclusion of affiliate links on this site for more information.
May 9, 2013
1 minute read
Show More
Back to top button
Close
Close