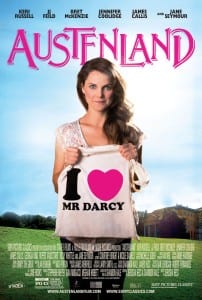 Sony Pictures Classics has released a new theatrical trailer for their upcoming romantic comedy Austenland. The film is directed by Jerusha Hess and stars Keri Russell, J.J. Feild, Jennifer Coolidge, Bret McKenzie, James Callis, and Jane Seymour. Austenland is scheduled to be released in a limited capacity on August 16th.

Austenland is a romantic comedy about 30-something, single Jane Hayes (Russell), a seemingly normal young woman with a secret: her obsession with Mr. Darcy-as played by Colin Firth in the BBC adaptation of Pride and Prejudice-is ruining her love life; no real man can compare. But when she decides to spend her life savings on a trip to an English resort catering to Austen-crazed women, Jane’s fantasies of meeting the perfect Regency-era gentleman suddenly become more real than she ever could have imagined.

Much Ado About Nothing – International Trailer

Much Ado About Nothing – International Trailer