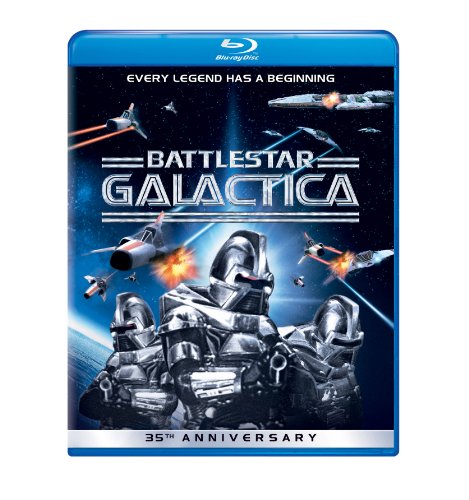 Universal Studios Home Entertainment has announced the wide release of Battlestar Galactica (1978) on Blu-ray this summer. The film is a re-cut 124-minute version of “Saga Of A Star World,” released in theaters (in Sensurround) several months after the $7 million, 148-minute TV pilot’s broadcast premiere. Currently, the Blu-ray is only available at Best Buy as an exclusive. However, the 35th Anniversary Edition release of the film will be available online and in retail stores everywhere beginning on August 6th.

In the deepest reaches of space, it is a fight to save all human life from extinction in this sci-fi adventure that launched the Battlestar Galactica phenomenon. After The Cylons launch a devastating surprise attack on the Twelve Colonies, a lone flagship battlestar, the Galactica, remains to aid the surviving colonists on their epic journey for a new home to a far-off legendary planet: Earth. They must survive the pursuing Cylons in a series of epic battles that will determine the fate of the human race in this non-stop action-packed classic filled with cutting-edge special effects by Academy Award-winner John Dykstra. The film is directed by Richard A. Colla and stars Richard Hatch, Dirk Benedict, Lorne Greene, and Jane Seymour.

Battlestar Galactica is presented in 1080p and DTS-HD Master Audio 2.1 with Sensurround. There are no special features included.

Disclaimer: Affiliate links are contained in this post. This means when you click a link, and purchase an item, Movie House Memories will receive an affiliate commission. Advertisers and Affiliate Partnerships do not influence our content. See our Terms of Use about the inclusion of affiliate links on this site for more information.
June 1, 2013
1 minute read
Show More
Back to top button
Close
Close