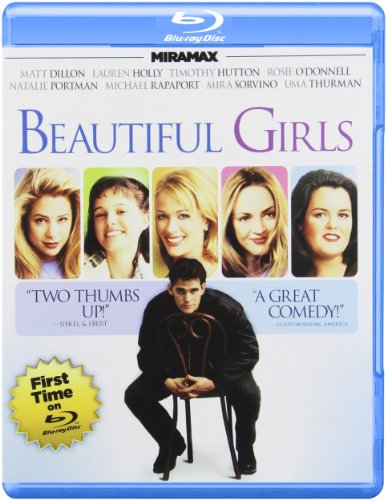 Echo Bridge Entertainment has announced that they will bring the romantic dramedy Beautiful Girls to Blu-ray this March.  The film was directed by Ted Demme and starred Timothy Hutton, Matt Dillon, Michael Rapaport, Uma Thurman, and Natalie Portman.  Beautiful Girls will be available in stores on Blu-ray on March 26, 2013.

In this romantic drama a group of high school buddies re-unite for their high school reunion in the small town where they grew up.  They deal with the life challenges of finding women to love and be loved by, committing to a relationship, and getting past their childhood dreams and desires to deal with reality and appreciate life.  Annabeth Gish, Lauren Holly, Rosie O’Donnell, Martha Plimpton, and Mira Sorvino co-star in the film.

Beautiful Girls was released in February 1996 and grossed over $10 million at the box office.  The film is primarily known as an early film role for Portman, who plays a young teenage girl who develops a crush on Hutton’s character.

Disclaimer: Affiliate links are contained in this post. This means when you click a link, and purchase an item, Movie House Memories will receive an affiliate commission. Advertisers and Affiliate Partnerships do not influence our content. See our Terms of Use about the inclusion of affiliate links on this site for more information.
January 14, 2013
1 minute read
Show More
Back to top button
Close
Close