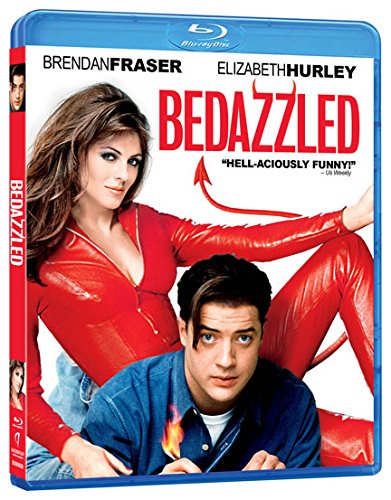 Anchor Bay has announced that they are releasing 20th Century Fox Home Entertainment’s Bedazzled onto Blu-ray this May. The film is directed by Harold Ramis and stars Brendan Fraser, Elizabeth Hurley, Frances O’Connor, Miriam Shor, and Orlando Jones. Bedazzled will be available online and in stores beginning May 28th.

The Devil’s never been so hot or hilarious in director Ramis’ remake of the 1967 film of the same name. Elliot Richards (Fraser), a hapless, love-starved computer technician, agrees to sell his soul in exchange for seven wishes in the hopes of ensnaring his colleague Allison Gardner (O’Connor), the girl of his dreams. But the sly Princess of Darkness (Hurley) has more than a few tricks up her sleeve. Before you can say Fire and Brimstone, Elliot’s life becomes a hysterical hell on earth.

Bedazzled was released in October of 2000 and grossed over $90 million in worldwide box office.

Disclaimer: Affiliate links are contained in this post. This means when you click a link, and purchase an item, Movie House Memories will receive an affiliate commission. Advertisers and Affiliate Partnerships do not influence our content. See our Terms of Use about the inclusion of affiliate links on this site for more information.
April 13, 2013
798 1 minute read
Show More
Subscribe
Login
0 Comments
Inline Feedbacks
View all comments
Most Recent Posts
Facebook Twitter LinkedIn Tumblr Pinterest Reddit
Back to top button
Close
wpDiscuz
0
0
Would love your thoughts, please comment.x
()
x
| Reply
Close