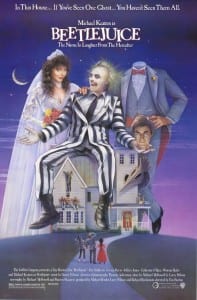 Beetlejuice opened theatrically in the United States on April 1, 1988, earning $8,030,897 in its opening weekend. The film eventually grossed $73,707,461 in North America. Beetlejuice was a financial success, recouping its $13 million budget five times, and was the tenth-highest grossing film of 1988. Based on 42 reviews collected by Rotten Tomatoes, Beetlejuice received an average 81% overall approval rating. By comparison, Metacritic received an average score of 67 from the 13 reviews collected.

Pauline Kael referred to the film as a “comedy classic”, while Jonathan Rosenbaum of the Chicago Reader gave a highly positive review. Rosenbaum felt Beetlejuice carried originality and creativity that did not exist in other films. Roger Ebert called it anti-climactic, explaining “the story, which seemed so original, turns into a sitcom fueled by lots of special effects and weird sets and props, and the inspiration is gone.” Vincent Canby of The New York Times called it “a farce for our time” and wished Keaton could have received more screen time. MaryAnn Johanson was impressed with the casting, production design and jokes. Desson Howe of the Washington Post felt Beetlejuice had “the perfect balance of bizarreness, comedy and horror”.