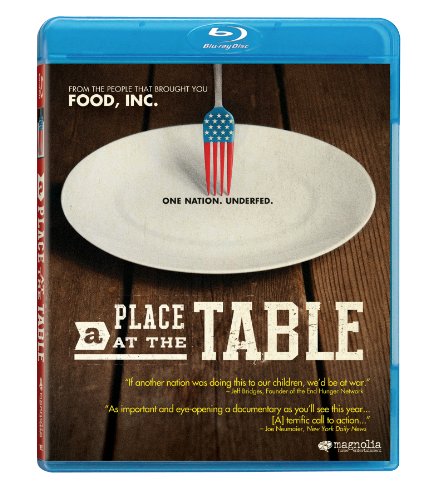 A Place at the Table [Blu-ray]

Magnolia Pictures has announced that they are adding Kristi Jacobson and Lori Silverbush’s documentary A Place at the Table to their Blu-ray releases this summer. The film will be available for purchase online and in stores across the United States on June 25th.

50 million people in the U.S.—one in four children—don’t know where their next meal is coming from, despite our having the means to provide nutritious, affordable food for all Americans. Directors Kristi Jacobson and Lori Silverbush examine this issue through the lens of three people who are struggling with food insecurity: Barbie, a single Philadelphia mother who grew up in poverty and is trying to provide a better life for her two kids; Rosie, a Colorado fifth-grader who often has to depend on friends and neighbors to feed her and has trouble concentrating in school; and Tremonica, a Mississippi second-grader whose asthma and health issues are exacerbated by the largely empty calories her hardworking mother can afford.

A Place at the Table was released in March of 2013. The film was nominated for the Grand Jury Prize at last year’s Sundance Film Festival.

The Blu-ray will include several special features, including: deleted scenes; cast and crew interviews; deleted interviews; AXS TV: A Look at A Place at the Table; A Good Day PSA; A Place at the Table – The Book; The Full Effect: Plum Organics Mission to Nourish Children Across America featurette; commentary with director Kristi Jacobson, director Lori Silverbush; and Tom Colicchio; and theatrical trailers.

Disclaimer: Affiliate links are contained in this post. This means when you click a link, and purchase an item, Movie House Memories will receive an affiliate commission. Advertisers and Affiliate Partnerships do not influence our content. See our Terms of Use about the inclusion of affiliate links on this site for more information.
May 26, 2013
1 minute read
Show More
Back to top button
Close
Close