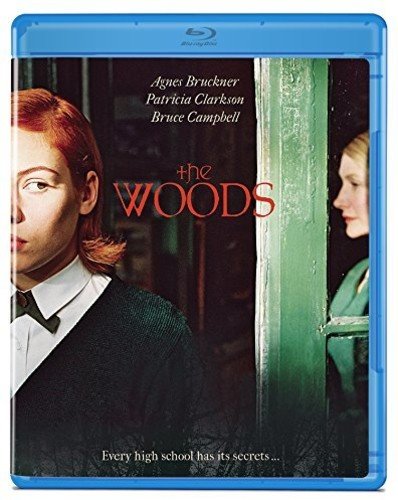 Olive Films has announced that they will release the 2006 horror thriller The Woods onto Blu-ray. The film was directed by Lucky McKee and starred Bruce Campbell, Patricia Clarkson, Lauren Birkell, Agnes Bruckner, Jane Gilchrist, and Rachel Nichols. The Woods will be available for purchase online and in stores beginning on September 22nd.

Gothic chills abound in the thriller The Woods directed by McKee from a screenplay written by David Ross. Amidst the splendor of rural New England sits Falburn Academy, a boarding school for young, impressionable and in some cases, troubled girls. Isolated from the outside world, Falburn sits near the woods – a sinister cluster of trees that appears to act as a protective wall. Heather Fasulo (Bruckner) is the school’s newest student. After setting fire to a forest, rebellious Heather is sent to Falburn to provide her with a sense of stability. Heather’s increasing nightmares prove to be more than homesickness when she discovers that the woods hold a chilling and terrifying secret.

Disclaimer: Affiliate links are contained in this post. This means when you click a link, and purchase an item, the MHM Podcast Network will receive an affiliate commission. Advertisers and Affiliate Partnerships do not influence our content. See our Terms of Use about the inclusion of affiliate links on this site for more information.
August 1, 2015
1 minute read
Show More
Back to top button
Close
Close