Lawman J.D. Cahill can stand alone against a bad-guy army. However, as a widower father, he’s on insecure footing raising two sons. Particularly when he suspects his boys are involved in a bank robbery… and two killings. 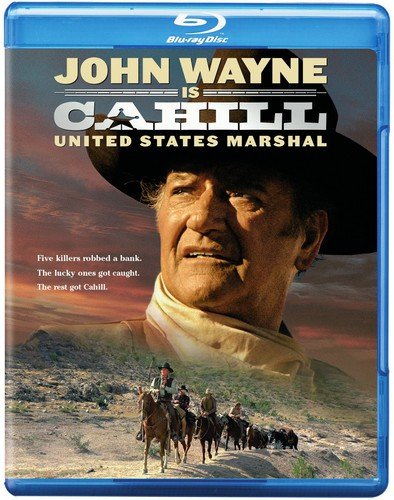 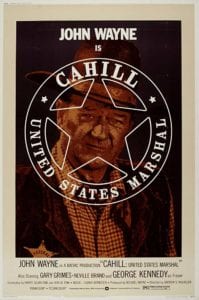 In the 1973 film, Cahill: United States Marshal, J.D. Cahill (John Wayne) is a widowed U.S. Marshall who is good at his job. He is away from home for long stretches of time which leaves his two sons, Danny and Billy Joe, feeling neglected.

Danny is the older one, and he’s in jail with an evil man named Abe Fraiser. Danny enlists Billy Joe to help escape from jail, along Fraiser and his murderous gang. Once out, they all rob a bank together. Cahill’s boys seem to do it more to get their father’s attention more than anything else.

During the robbery, the gang manages to shoot and kill the town’s sheriff. They send Billy Joe off to hide the stolen money, and Danny and the others return to their locked jail cells; using that as an alibi.

Billy Joe refuses to follow Fraser’s instructions, and doesn’t hide the money where he was told. This angers Fraiser, and he threatens to kill him.

Meanwhile, Cahill returns home. J.D. knows his sons well enough to know something is amiss, and he, with the help of half-Comanche tracker named Lightfoot, sets out to bring in the real murderers. Cahill winds up arresting four suspects in the Sheriff’s murder. However, they are the wrong men, and although they are innocent, a court finds them guilty. The judge sentences them all to be hanged until dead.

Things get hairy when a man named Brownie ambushes Cahill and Lightfoot while following the tracks. Lightfoot wounds Brownie, but he’s killed himself.

Eventually, they recover all of the bank’s money. Cahill and his sons try to return the gang’s share to Fraser. This results in once final confrontation with Cahill, Danny, and Billy Joe on one side and Fraser and his gang on the other.

Of course the Cahills win, and the boys reconcile with their father. J.D. for his part promises to be home more as long as his boys don’t rob any more banks.

User Rating: Be the first one !
May 17, 2019
2 minutes read
Show More
Back to top button
Close
Close