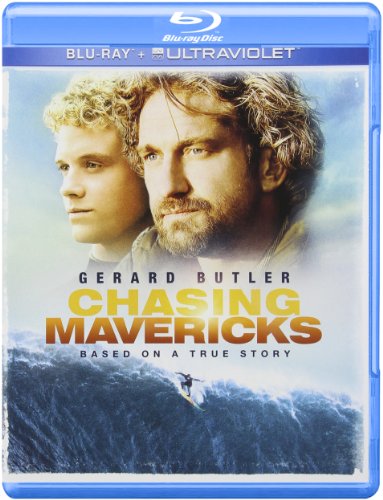 20th Century Fox has announced that they will bring their sports drama Chasing Mavericks to Blu-ray this February.  The film is directed by Michael Apted and Curtis Hanson and stars Gerard Butler, Jonny Weston, Elisabeth Shue, and Abigail Spencer.  Chasing Mavericks will hit stores on Blu-ray and DVD on February 26, 2013.

Chasing Mavericks is the inspirational true story of real life surfing phenom Jay Moriarty (Weston).  When 15 year old Jay discovers that the mythic Mavericks surf break, one of the biggest waves on Earth, is not only real, but exists just miles from his Santa Cruz home, he enlists the help of local legend Frosty Hesson (Butler) to train him to survive it.  As Jay and Frosty embark on their quest to accomplish the impossible, they form a unique friendship that transforms both their lives, and their quest to tame Mavericks becomes about far more than surfing.

Chasing Mavericks was released in October 2012 and grossed over $6 million at the box office.

Here is the theatrical trailer for Chasing Mavericks.

Disclaimer: Affiliate links are contained in this post. This means when you click a link, and purchase an item, Movie House Memories will receive an affiliate commission. Advertisers and Affiliate Partnerships do not influence our content. See our Terms of Use about the inclusion of affiliate links on this site for more information.
January 1, 2013
1 minute read
Show More
Back to top button
Close
Close