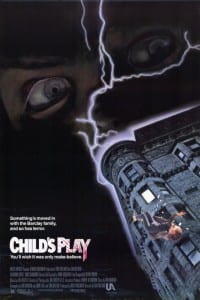 It is rumored that the “Good Guy Dolls” in Child’s Play were based on the My Buddy dolls created by Hasbro.  However, during an airing of the movie on the morning of January 7, 2007, AMC claimed the creator modeled the doll after the Cabbage Patch Kids.  This was confirmed by an interview with the creator, Don Mancini, which was featured on the Seed of Chucky DVD.  Don Mancini has stated that his original script was a whodunit story which dealt with the effect of advertising/television on children.  Mancini’s original script was also written to toy with the audience a bit longer, making them wonder if young Andy was the killer rather than Chucky.  This technique was still somewhat achieved in the film, as the killer isn’t shown on screen for the first 40–45 minutes.

Maggie’s death was originally going to be by electrocution while taking a bath.  The idea was abandoned, and was later used for Tiffany’s “death” in Bride of Chucky.

Here is the original theatrical trailer for Child’s Play.