In City Lights, a meager tramp falls for a blind flower girl. Thinking he’s a wealthy man, the girl falls for him too. While he vows to help her with the money she needs for an operation that can restore her sight, he’s as poor as the day is long. The Tramp sets out to get money using any means necessary. 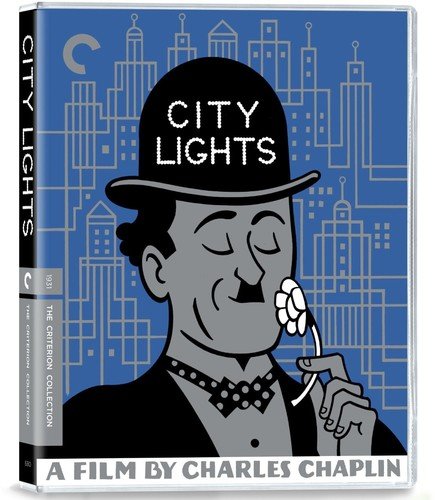 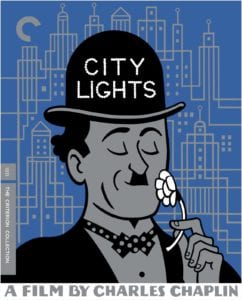 City Lights begins with citizens and dignitaries at an unveiling of a new monument dedicated to peace and prosperity. After your typical political speeches are completed, they lift the cover on the monument. It reveals the Little Tramp asleep on one of the sculpted figures.

The Tramp hysterically evades authorities and escapes. He next comes across some newsboys who bully him about the clothes he’s wearing, so he heads over to admire a nude statue’s curves. While distracted, a sidewalk elevator almost kills him.

Out on a street corner is a beautiful flower girl, and The Tramp immediately takes a liking to her. He quickly realizes that she’s blind, so she can not tell he’s down on his luck. She actually mistakes him as a wealthy owner with an automobile and a chauffeur.

The Tramp heads to the blind girl’s street corner, but when she’s not there, he goes to her apartment. He overhears a doctor tell her grandmother that the girl is very ill with a fever. The Tramp takes a job as a street sweeper to pay her bills.

While on a lunch break, the Tramp brings the blind girl some groceries. He reads a newspaper article to her about a Viennese doctor who has a cure for blindness. She replies that it will be wonderful when she can see him, but the Tramp is afraid what will happen when she can, and realizes he’s not rich. While at her apartment, the Tramp finds a notice of eviction her grandmother hid from her. He leaves the blind girl with a promise that he will pay her rent.

When the Tramp gets back to his job, they fire him for tardiness. In need of money, a prizefighter convinces him to fight him in a rigged bout. He will go easy on the Tramp, and then they can split the prize money. However, right before the fight, the cops arrive to arrest the prizefighter, and he runs out of the arena. The promoter replaces him with another man who can and will legitimately knock the Tramp out. The Tramp does his best to float like a butterfly and sting like a bee, but the new prizefighter knocks him out cold.

After the match, the Tramp sees the eccentric millionaire drunk again, and once again, he invites him back to his place. There, the Tramp tells him about the blind girl’s dilemma. The millionaire gives him the money she needs for her surgery, but then, two burglars rush in and knock out the millionaire, and rob him of his money.

The police arrive, and find the Tramp with some money, and move to arrest him for the robbery (because the sober millionaire never remembers the Tramp). He escapes capture long enough to give the blind girl the money she needs for her operation. However, the police end up catching him, and toss him in jail.

The police release the Tramp months later where he heads over to the blind girl’s corner, but she’s not there. He finds her with her eyesight restored from a successful surgery; running a busy flower shop with her grandmother.
The Tramp stumbles by the shop, where the (no longer blind) girl arranges flowers in the window. The newsboys are out front too, and they begin harassing the Tramp. He turns from them to find the girl looking at him. Although she’s never laid eyes on him before, his smile brightens her day. She offers him a flower and a coin through the window.

Embarrassed, the Tramp turns to leave, but the girl steps outside of her shop, and again offers him a flower. He takes it, and she grabs his hand, and puts the coin in it too, but something causes her to stop. Her smile turns to bewilderment as she runs her hands over his arms and clothes. She recognizes the Tramp as the man who helped her. She grabs his hand and pulls him to her. The Tramps face turns to joy as the film fades away.