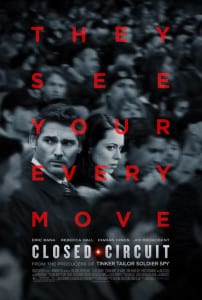 From the producers of Tinker, Tailor, Soldier, Spy comes the new international thriller, Closed Circuit. Following a mysterious explosion in a busy London market, the police swoop, a suspect is detained, and the country prepares for one of the most high-profile trials in British history. Two exceptional lawyers with a romantic history step into a dangerous web of secrets and lies, and when evidence points to a possible British Secret Service cover up, it’s not just their reputations, but their lives that are at stake.