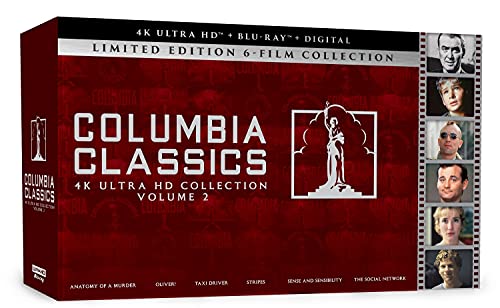 Directed by Oscar nominee Ang Lee (Crouching Tiger, Hidden Dragon), this Academy Award-winning adaptation by Emma Thompson of Jane Austen’s classic novel tells the story of the Dashwood sisters: pragmatic Elinor (Thompson) and passionate Marianne (Kate Winslet). When their father dies unexpectedly, his estate must pass by law to his son from his first marriage, leaving Mr. Dashwood’s current wife and daughters without a home and with barely enough money to live on. As both sisters struggle to find romantic fulfillment in a society obsessed with financial and social status-Elinor with shy, charming Edward (Hugh Grant), and Marianne with either the dashing Willoughby (Greg Wise) or the haunted Colonel Brandon (Alan Rickman)-they must learn to mix sense with sensibility in their dealings with both money and men.

When Army officer Lieutenant Frederick Manion (Ben Gazzara) admits to murdering his wife Laura’s (Lee Remick) it falls to a local prosecutor-turned-defense attorney, Paul Biegler (James Stewart) to defend him. Aided by his alcoholic, yet resourceful, mentor, Parnell McCarthy (Arthur O’Connell), and a wisecracking secretary played by Eve Arden, Biegler goes head to head with a formidable big-city prosecutor, Claude Dancer (George C. Scott). With a loutish, uncooperative client and his alluring wife forcing him to navigate some tricky legal shoals, Biegler uses both the reluctant testimony of the victim’s daughter and a novel defense of “murder by irresistible impulse” as he fights to convince the jury to acquit the unsavory Lieutenant Manion.

Considered among the best films of all time, Martin Scorsese’s Taxi Driver was nominated for Academy Awards for Best Picture, Best Actor (Robert De Niro), Best Supporting Actress (Jodie Foster) and Best Original Score (Bernard Herrmann). Solitary, alienated, and emotionally scarred from Vietnam, taxi driver Travis Bickle (De Niro) works the night shift in Manhattan.Though the world around him is teeming with life, Travis is unable to connect with anyone. Travis’s pent-up anger and misplaced loyalty finally boil over in a paroxysm of revenge and violence.

When John Winger (Bill Murray) loses his job, his car, his apartment and his girlfriend — all in one day — he decides he has only one option: volunteer for the army. And he talks his friend Russell (Harold Ramis) into enlisting with him. Where else, they figure, can they help save the world for democracy… and meet girls! John and Russell find basic training a snap: they are arrested twice, have endless run-ins with their drill sergeant (Warren Oates) and get into a bit of a mess at a female mud wrestling match. They even manage to steal a top-secret government vehicle and accidentally wind up behind the iron curtain. Bill Murray has joined the Army, and the Army will never be the same.

Oliver (Mark Lester), a runaway orphan, meets the Artful Dodger (Jack Wild), who takes him to Fagin (Ron Moody), a wily old fence who tutors young boys in the art of crime. Caught on his first assignment, Oliver is arrested but his intended victim, Mr. Brownlow (Joseph O’Conor), takes a liking to the child and brings him into his home. Bill Sikes (Oliver Reed), Fagin’s partner, is worried Oliver will talk, so he and girlfriend Nancy (Shani Wallis) kidnap the boy. Knowing Sikes will kill Oliver, Nancy returns him to Brownlow, but is murdered by Sikes, who himself is killed while trying to escape. Oliver’s revealed to be Brownlow’s great nephew and lives happily ever after.

On a fall night in 2003, Harvard undergrad and computer programming genius Mark Zuckerberg sits down at his computer and heatedly begins working on a new idea. In a fury of blogging and programming, what begins in his dorm room soon becomes a global social network and a revolution in communication. A mere six years and 500 million friends later, Mark Zuckerberg is the youngest billionaire in history… but for this entrepreneur, success leads to both personal and legal complications.

Disclaimer: Please note that this post contains affiliate links. This means when you click a link and purchase an item, Movie House Memories may receive an affiliate commission at no additional cost to you. This bit of compensation helps keep content on our site free of charge to its readers. Advertisers and Affiliate Partnerships do not influence our content. See our Terms of Use about the inclusion of affiliate links on this site for more information.
June 16, 2021
3 minutes read
Show More
Back to top button
Close
Close