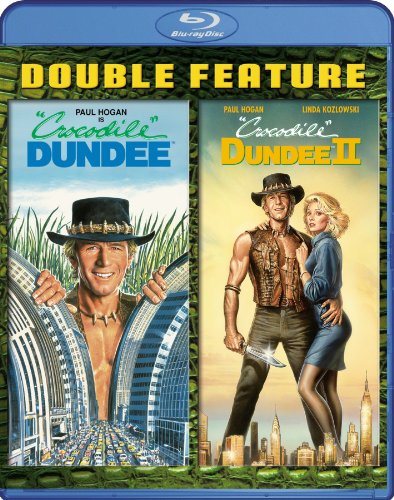 In Crocodile Dundee, Michael J. “Crocodile” Dundee is an Australian crocodile hunter living in the Australian outback. There he runs a safari business with his trusted friend and mentor Walter Reilly. One day, New York journalist, Sue Charlton, arrives to interview Mick about his life. After he saves her from a crocodile, she invites him to the Big Apple since Mick claims he’s never been to a city. While Mick finds life in New York City a lot different than his home, falling in love is pretty much the same everywhere… he and Sue prove that.

In Crocodile Dundee II, Mick Dundee finds himself still trying to adapt to life in New York City. One day, local crime boss named Rico and his associates kidnaps Sue because her ex husband, photographer Bob Tanner, witnesses them commit a brutal crime. He takes snapshots of it, and sends them to Sue. After Mick rescues Sue from the gang, he decides to take her back home with him to Australia for protection. However, the gang follows the pair, and Mick must take them on doing what he does best.

Disclaimer: This post contains affiliate links. This means when you click a link, and purchase an item, Movie House Memories will receive an affiliate commission. Advertisers and Affiliate Partnerships do not influence our content. See our Terms of Use about the inclusion of affiliate links on this site for more information.
June 9, 2020
1 minute read
Show More
Back to top button
Close
Close