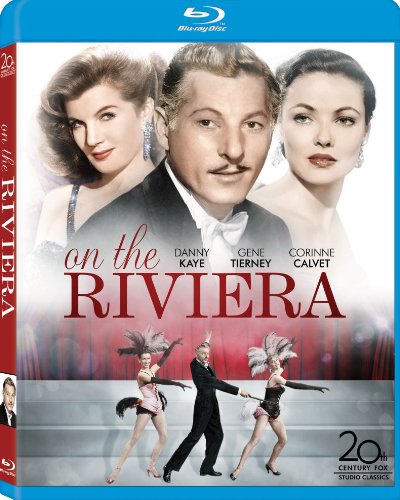 On the Riviera Blu-ray

20th Century Fox Home Entertainment has officially announced the addition of the musical comedy On The Riviera to their upcoming slate of Blu-ray releases. The film was directed by Walter Lang and starred Danny Kaye, Gene Tierney, Corinne Calvet, Marcel Dalio, and Jean Murat. On The Riviera is currently available for pre-order online and will be available in stores everywhere beginning on October 8th.

You’ll double over with laughter at Danny Kaye’s Golden Globe-winning dual performances in this classic musical farce that was nominated for two Oscars Awards. Faced with a scheduling conflict, a womanizing French financier-aviator (Kaye) hires a nightclub performer (also Kaye) to temporarily impersonate him. But things go hilariously awry as one man tries to romance two beautiful women (Tierney and Calvet) – who both think he’s their lover. On The Riviera was released in May of 1951.

The On The Riviera Blu-ray will include several special features, including:

Disclaimer: Affiliate links are contained in this post. This means when you click a link, and purchase an item, Movie House Memories will receive an affiliate commission. Advertisers and Affiliate Partnerships do not influence our content. See our Terms of Use about the inclusion of affiliate links on this site for more information.
September 30, 2013
428 1 minute read
Show More
Subscribe
Login
0 Comments
Inline Feedbacks
View all comments
Most Recent Posts
Facebook Twitter LinkedIn Tumblr Pinterest Reddit
Back to top button
Close
wpDiscuz
0
0
Would love your thoughts, please comment.x
()
x
| Reply
Close