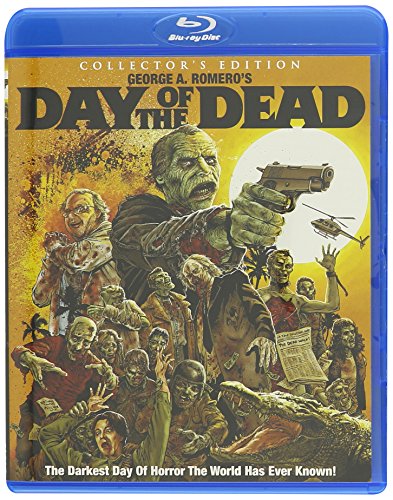 Scream Factory has announced that they are adding Day of the Dead to their upcoming slate of Blu-ray releases. The film was written and directed by George A. Romero and stars Lori Cardille, Terry Alexander, Joseph Pilato, and Jarlath Conroy. Day of the Dead will be available in stores and online in sometime later in 2013.

The concluding part of George A. Romero’s cult horror trilogy opens with the undead roaming the planet freely. The living have been forced underground, where they make their base in a hidden missile depot, helping with the experiments of scientist Doctor Logan (Richard Liberty), who hopes to domesticate the zombies. However, the military faction of the human survivors favor a more direct approach, and with food stocks becoming ever more depleted, they decide to take action. What follows is the final showdown between the forces of the living and the armies of the dead.

Day of the Dead was released in July of 1985. The horror film grossed over $5 million at the box office.

Jumanji: Welcome to the Jungle (2017) has fun and games on Blu-ray

The Transformers: The Movie (1986) Rolls out on Blu-Ray for Its 30th Anniversary

Jumanji: Welcome to the Jungle (2017) has fun and games on Blu-ray

The Transformers: The Movie (1986) Rolls out on Blu-Ray for Its 30th Anniversary