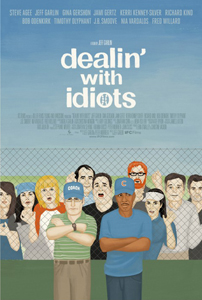 IFC Films has released a new trailer for the upcoming comedy Dealin’ With Idiots. The film is directed by comedian Jeff Garlin, who wrote the screenplay along with Peter Murrieta. The cast includes Garlin, Gina Gershon, Jami Gertz, Bob Odenkirk, Nia Vardalos, Richard Kind, and J.B. Smoove. Dealin’ With Idiots is scheduled for a limited release in theaters beginning on July 12th.

The film tells the story of Max Morris, a famous comedian. Faced with the absurd competitiveness surrounding his son’s youth league baseball team, Max decides to get to know the colorful parents and coaches of the team better in an attempt to find the inspiration for his next movie.

Hammer of the Gods – Trailer

Hammer of the Gods – Trailer