Two narcissistic arch rivals discover the ultimate accessory – a potion that will keep them forever young – when they meet a mysterious enchantress with deep ties to the Hollywood elite. But they get more than they bargained for when their newfound beauty only intensifies their vanity – and rivalry. 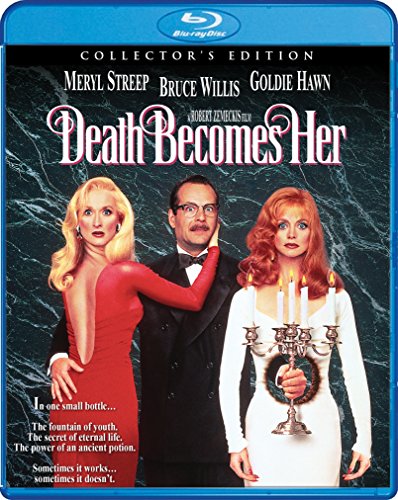 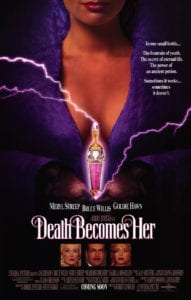 Death Becomes Her begins in 1978 where a narcissistic and manipulative actress named Madeline Ashton falters on Broadway in a musical version of Sweet Bird of Youth. When she invites her rival, the aspiring writer, Helen Sharp backstage, Helen’s fiancé and plastic surgeon Ernest Menville becomes smitten with her. He then calls off their marriage and marries Madeline instead.

Seven years pass, and Helen is now obese, depressed, and in a psychiatric hospital. She fools the staff into believing she’s rehabilitated, and they release her, but really, she’s just lying so she can take her revenge on Madeline.

Seven more years pass, and it’s now 1992. Madeline and Ernest live in Beverly Hills, but the two are miserable with their lives, careers, and what they have become. Madeline finds herself out of work due to her age and fading looks while Ernest works as a reconstructive mortician with a drinking problem.

Out of the blue, Helen sends the Menvilles an invite to a party celebrating her new book titled Forever Young. Madeline rushes off for a quickie facial at the spa she frequents for a little spruce up. When the owner hears Madeline’s dilemma, she gives her the business card of a youth rejuvenation specialist named Lisle Von Rhuman.

Once she arrives, she finds Lisle to be a young, attractive, socialite even though Lisle claims to be 71. She tells Madeline her secret is a very expensive potion that gives a person eternal life with an everlasting youthful appearance. Madeline quickly purchases the potion, and drinks it. It suddenly rejuvenates her, and her youthful appearance reappears as advertised.

However, as a condition of the purchase, Madeline must retire from public life for ten years to keep this secret secret. Also, Lisle tells Madeline to take good care of her body. It’s the only one she has.

Meanwhile, Helen seduces Ernest, and tricks him into to killing Madeline. Once Madeline returns home, the two argue, and Madeline falls down the stairs; breaking her neck. Ernest calls Madeline for advice, and as he does so, Madeline gets up from her fall. She walks towards him with her head twisted all the way around to her back.

Ernest is a bit freaked out. Thinking she has a dislocated neck, he drives her to the emergency room. The doctors tell her that she’s technically dead, and she passes out. When they find she neither has a pulse nor a temperature above 80°F, they take her down to the morgue. Ernest believes that a miracle has happened, and that Madeline was resurrected. He steals her from the morgue, and takes her back home. There, he uses his mortician training to repair Madeline’s body.

Helen soon shows up for the dirt on Madeline, and when she overhears Helen and Ernest, Madeline shoots Helen with a shotgun. This leaves a very large hole in Helen’s abdomen, but she survives no problem. Madeline realizes Helen too drank Lisle’s potion.

Ernest is disgusted with the two women’s actions, and turns to leave, but the “ladies” stop him, and convince him to repair their broken bodies. Since the ladies figure they will need someone to fix them up over the years, the two collude to get Ernest to drink the potion too, so he can tend to them forever.

They take Ernest to Lisle, and she offers to give him the potion for free in exchange for fixing her up under the hood when she needs it too. However, Ernest doesn’t think eternal life is all it’s cracked up to be, and refuses to drink it. He snatches it up, and runs off. The ladies chase him to the roof where they trap him.

Ernest knows that they only want him to drink the potion for their selfish reasons, and not because they actually love or like him. He tosses the bottle off the roof where it crashes a few stories below. He then falls off the rooftop himself, but the pool saves him. Lisle banishes the ladies from her sight, and from then on, the two only have themselves to rely on for maintenance.

Thirty-seven years fly by when we next see Helen and Madeline. They are leaving Ernest’s funeral where the guests recall him living a full life with his family and friends. The two ladies, however, are shells of their former selves with grey, rotting flesh. All assortments of paint and putty smeared over the cracks and peeling skin.

While at the top of the staircase, Helen trips. Madeline pauses to help, but Helen grabs her anyway. The two take a tumble down the stairs, and break into little pieces. As their two heads roll together, Helen asks Madeline if she remembers where they parked the car.