In Destination Wedding, Frank and Lindsay meet at the airport to board their flight to Paso Robles. As they talk, they realize that they are both in town for the same wedding. The groom is Frank’s half brother and Lindsay’s ex fiancée. Throughout the wedding weekend, Frank and Lindsay become quite an item. They often go on walks to avoid participating in various activities with the other wedding guests. As they reveal their past lives and opinions, they two begin to form a bond even when they disagree on a variety of topics. 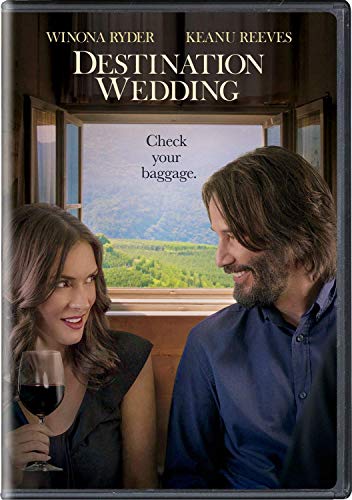 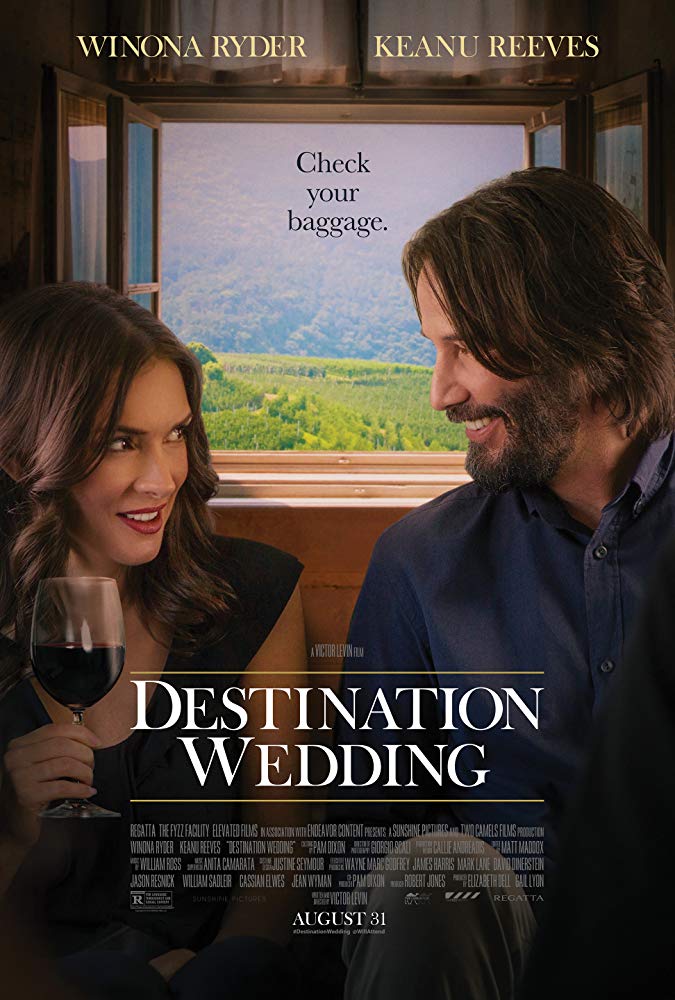 Destination Wedding begins at an airport. Frank (Keanu Reeves) and Lindsay (Winona Ryder) are both waiting for a small plane to arrive. Frank attempts to make small talk by complimenting Lindsay about her dress. She thanks him and compliments him about his jacket and then proceeds to incessantly talk. Frank silently listens, and when Lindsay pauses he takes the opportunity to step forward to end the interaction. Lindsay takes Frank’s shuffle as an attempt by Frank to get in front of her in line and proceeds to berate him. Frank clarifies that he just didn’t want to listen to her anymore before moving to the other side of terminal.

When Frank gets onto the plane, he is dismayed to learn that the only remaining seat is next to Lindsay. His despair only deepens with he finds out that she is going to the same place he is, Paso Robles. He becomes completely depressed when he learns that she is going to the same destination wedding that he is. Frank is the half-brother of the groom (Ted Dubost), and Lindsay is the ex-fiancée of the groom. They have both heard of each other from their mutual acquaintance, and what they have heard is not good.

At the wedding, Lindsay has difficulty seeing her ex getting married, so she asks Frank to take a walk with her. While they are walking through the countryside, they come across a mountain lion. Frank tells Lindsay to run and save herself while he stays and fights the large cat. Lindsay offers to do the same. They agree to both run, and they get away from the mountain lion. Lindsay is surprised at Frank’s selfless gesture. The couple trip and fall down the mountain. While they are lying down, they begin to kiss. However, Lindsay keeps telling Frank to stop, but then she kisses him again and again. They eventually have sex with each other, which they constantly talk through.

That night, the couple discuss the benefits and drawbacks of trying to continue their relationship. Lindsay is open to the possibility of an ongoing romance between the two, and even argues that sex with Frank finally gave her the closure she needed from the relationship with Frank’s half-brother. Frank is more pessimistic about the possibility and believes that they should just enjoy the moment as it occurs. They fight, but end up spending the night together.

The next day, Frank and Lindsay pack and prepare to go home. They drive to the airport and even sit next to each other on the plane. Lindsay wonders if they are in love, where Frank believes that they should just part as friends. Frank believes that a continuing relationship between them would end in disaster. Once they arrive back in the United States, the couple part company in the taxi line at the airport. Frank allows Lindsay to take the first taxi and they say goodbye.

That night, Frank is going through all the free things he took from the hotel and appears unsettled. Lindsay is at home alone in her pajamas when she hears her doorbell ring. When she opens the door, Frank is standing there.