In Die Hard 2, once again, New York cop John McClane is in the wrong place at the wrong time. This time it’s while he’s waiting for his wife’s plane to arrive at Washington’s Dulles Airport when he uncovers a plot to sabotage the airport’s landing system. Some criminals want to hold the airport to ransom so they can free their drug boss during his extradition to America. Once they get him they will all safely escape on another plane. When the thugs didn’t know is that Holly McClane is also on a flight home to the same airport they’re about to hijack. These boys are about to die harder! 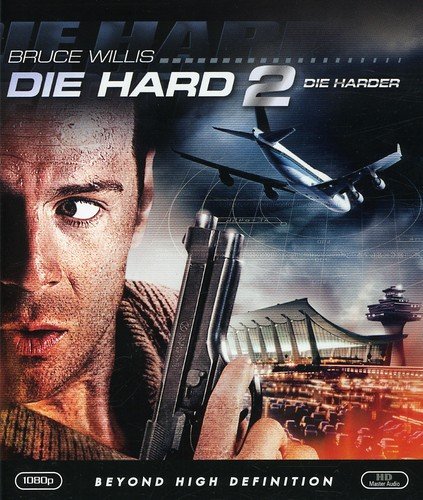 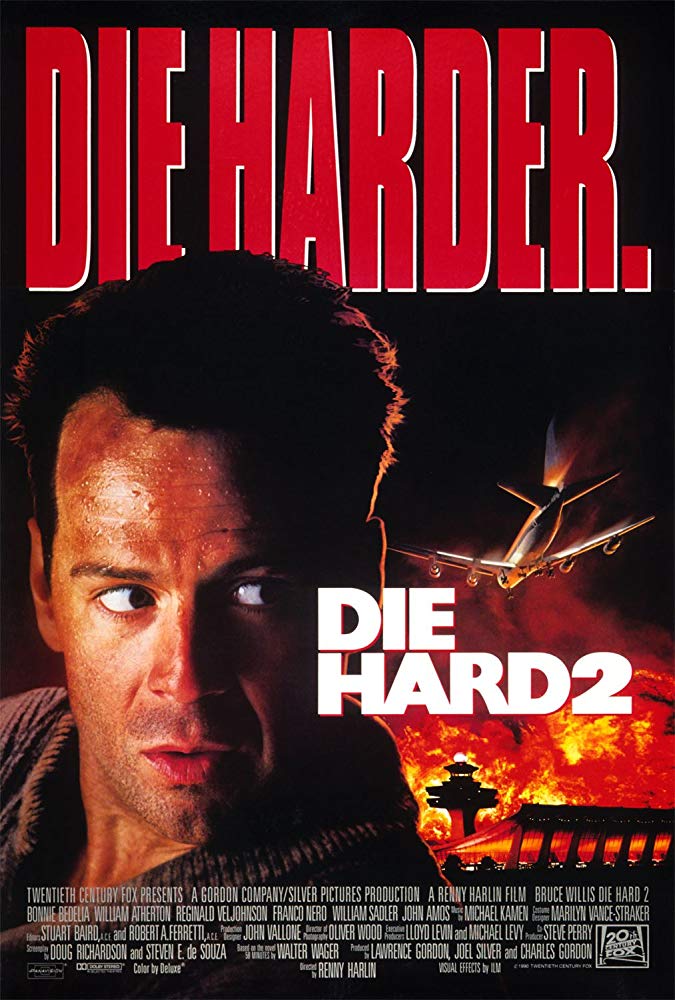 Die Hard 2 begins two years since the events of the Nakatomi Tower terrorist attack in Los Angeles. Officer John McClane (Bruce Willis), now of the Los Angeles Police Department, is at Dulles International Airport in Washington D.C. on Christmas Eve awaiting the arrival of his wife Holly (Bonnie Bedelia) on her flight from California. While he is waiting, McClane notices two men behaving suspiciously in the airport lobby. He follows one of the men as he enters the baggage area.

Once there, he confronts the man who then tries to kill McClane. The other mystery man shows up to help his partner, and McClane engages in a shootout throughout the baggage area. McClane kills one of the men, but the other escapes. During the clean-up, McClane is shocked to learn that the captain of the airport police, Carmine Lorenzo (Dennis Franz), is not going to investigate what the men were doing and is simply going to chalk it up as petty theft.

Meanwhile, former U.S. Special Forces Colonel William Stuart (William Sadler) and other former members of his unit kill the owner of a church building and establish a base near the airport. They are able to hack into the air traffic control systems via their underground cables. After they access the system, they sever the airport’s tower’s ability to communicate with incoming planes and deactivate all the airport’s runway lights. Air Traffic Control now has no way to land any aircraft or to warn them of the terrorist takeover.

Stuart’s mission is to rescue General Ramon Esperanza (Franco Nero), a drug lord and a military dictator of the fictional country of Val Verde. Esperanza has been arrested for his crimes and is being extradited to the United States to stand trial for drug trafficking charges. Stuart demands that a Boeing 747 cargo plane be prepped for the terrorists’ escape to another country once they have Esperanza. Stuart warns the traffic controllers not interfere or try to restore their power and control. With his wife on an approaching plane with too little fuel to be directed elsewhere, McClane intervenes and tries to stop the terrorists.

Not willing to give into the terrorists, Dulles communications director Leslie Barnes (Art Evans) comes up with a plan to use an unfinished antenna array to communicate with the planes in the air. The airport SWAT team escorts him to the area of the airport that is still under construction. They are ambushed by Stuart’s men who kill all the members of the SWAT team and are about to kill Barnes until the timely arrival of McClane. McClane kills all of Stuart’s team and saves Barnes, but the antenna array is blown up cutting off that option. However, Stuart is upset about losing some of his men, so he retaliates by recalibrating the instrument landing system and impersonates air traffic controllers to crash a British airliner, killing everyone on board.

With the crashing of a plane, the military is called in to assist. The U.S. Army Special Forces is led by Major Grant (John Amos), who is one of Stuart’s former soldiers. Grant excludes McClane from all planning. McClane befriends and relies on the airport’s janitor, Marvin (Tom Bower) to try to get access to the conference room to stay in the loop, but he finds that Marvin has one the mercenaries’ two-way radios that still has the code typed in. With the radio, McClane can overhear all of Stuart’s transmissions. Over the radio, McClane hears that Esperanza has killed his captors and the pilot on the plane carrying him and needs an emergency landing.

McClane gets to Esperanza’s plane on the snowy runway before Stuart’s henchmen. He wounds the dictator, but when Stuart and his men arrive, McClane is forced to retreat to the cockpit of the plane. The terrorists shoot out the windows of the cockpit and begin lobbing grenades in with McClane. The detective straps himself in the pilot seat and ejects himself just before the grenades destroy the plane. McClane lands safely a short distance away from Stuart and his men.

When McClane returns to the airport, Barnes tells him that he thinks he knows where the terrorists are operating from. He and McClane go to the church, and when McClane is attacked by one of terrorists, Barnes calls for the troops. When Grant and his men arrive, they engage in a firefight with Stuart’s men. During the battle, Stuart’s men escape out the back on snowmobiles. McClane pursues them but soon discovers that the mercenaries’ guns are loaded with blanks. McClane concludes that Grant and his men are in cahoots with Stuart.

When McClane returns to the airport again, he gets Lorenzo to finally do something. The police captain organizes his limited men to intercept and stop the Boeing 747 from taking off. On board Holly’s flight, her plane is preparing to make a crash landing as they are out of fuel. Her situation has only been made worse by reporter Richard Thornburg (William Atherton) making exaggerated reports from the plane’s bathroom which has caused panic on the plane and at the airport.

McClane gets a ride on a news helicopter that drops him on to the wing of the taxiing 747. He uses his jacket to jam the wing of the airplane and prevent the terrorists from taking off. Grant comes out onto the wing and the two fight, with McClane winning when he causes Grant to fall into the jet engine. Next, Stuart fights McClane, causing McClane to fall from the plane, but not before he pulls the lever to dump the fuel from the wing.

Once on the ground, McClane uses his lighter to lite the fuel which backtracks to the taxiing plane and blows up the plane, Esperanza, Stuart, and all his men. The pilots of Holly’s plane are now able to see the runaway due to the burning jet fuel, and they safely land their plane. McClane finds his wife as she gets off her plane, and the two embrace. A happy ending to another McClane family Christmas.