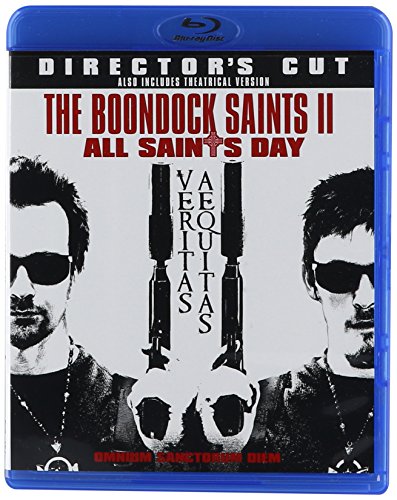 The film takes place eight years after the events of the first film. The MacManus Brothers have been living with their father on a sheep farm deep in isolated Ireland. One day their uncle tells them that they have been framed for the murder of a Bostonian Catholic priest. The boys must return to Boston to not only clear their names but find the men who framed them.

The Boondock Saints II: All Saints Day was released in October of 2009 and grossed over $10 million in worldwide box office.

The Directors Cut of The Boondock Saints II: All Saints Day features 27 minutes of never-before-seen footage, including a longer opening sequence, a lengthened fantasy sequence and an extended elevator sequence leading up to the Prudential shoot-out. The Blu-ray will include several special features, including: filmmaker and cast commentaries; deleted scenes; seven behind-the-scenes featurettes; Saints Off Script featurette –  a rare look at the Saints having fun on set while the cameras aren’t rolling; and Back to Boondock featurette – an exclusive tour of pre-production with the cast and filmmakers.

Disclaimer: Affiliate links are contained in this post. This means when you click a link, and purchase an item, Movie House Memories will receive an affiliate commission. Advertisers and Affiliate Partnerships do not influence our content. See our Terms of Use about the inclusion of affiliate links on this site for more information.
June 20, 2013
468 1 minute read
Show More
Subscribe
Login
0 Comments
Inline Feedbacks
View all comments
Most Recent Posts
Facebook Twitter LinkedIn Tumblr Pinterest Reddit
Back to top button
Close
wpDiscuz
0
0
Would love your thoughts, please comment.x
()
x
| Reply
Close