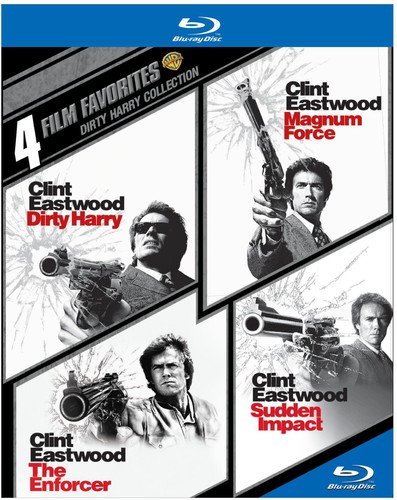 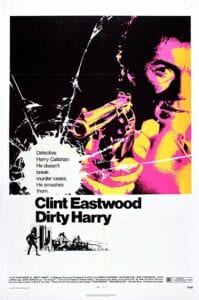 There is a psychopathic killer hunting people on the streets of San Francisco. He goes by the name of “Scorpio” and he enjoys two things: killing people and toying with the police. Scorpio begins his game with the San Francisco PD by shooting a woman with a high-powered rifle while she is swimming in a rooftop pool. SFPD brings in Inspector Harry Callahan to investigate, who immediately finds a ransom demand from “Scorpio”. The city needs to pay him $100,000 or he will kill more people. The nearly bankrupt city has no choice but to agree to the killer’s demands as a stalling tactic while the police work to secure the city and apprehend the killer.

Harry Callahan is not well liked by the police chain of command and the mayor’s office. In fact, he is generally known as “Dirty” Harry, due to his knack for getting every dirty job that comes along. During a break from his “Scorpio” investigation, Harry foils a bank robbery while eating his lunch by shooting two robbers and holding a third at gunpoint with an empty weapon. Harry is shot in the incident, but he does bluff the surviving robber in to surrendering rather than risk being shot by Harry’s 44 Magnum.

To assist in his “Scorpio” investigation, Harry is assigned a new partner, since his last partner is on an extended medical leave. The rookie detective Chico Gonzalez and Harry pull a detail in roof top, night time surveillance, and they are nearly successful in apprehending “Scorpio”, but the lone gun man manages to escape the SFPD.

However, “Scorpio” is successful in killing his next victim, a 10-year old African American boy before he kidnaps a teenage girl, Mary Deacon. “Scorpio” threatens to kill her unless he is given $200,000. Callahan volunteers to deliver the money. Against orders, Callahan uses a wire to communicate with Chico so that the younger detective can follow and protect Harry as “Scorpio” runs the elder detective all over San Francisco.

Eventually, Harry is directed to Mount Davidson where “Scorpio” disarms Harry and proceeds to beat the detective before informing Harry that he will let the teenage girl victim die despite being paid the ransom. Chico arrives to save Harry from being killed but is shot in the process. Harry manages to stab “Scorpio” in the leg with a switchblade causing the killer to retreat without the ransom.

Harry follows up with hospitals to see if “Scorpio” seeks medical treatment for his wounds. Eventually, a doctor reveals that the psychopath was there and that he lives across the street from the hospital at Kezar Stadium. Without waiting for back up or a warrant, Harry finds “Scorpio” there and shots the killer in the leg as he is trying to make his escape. Despite “Scorpio’s” pleas for medical treatment and a lawyer, Harry tortures the madman for the location of the imprisoned Mary. We next see the body of the nude, and clearly dead, Mary being removed from a hole in the Earth. “Scorpio” has taken another victim.

The following day, Harry is brought into the district attorney’s office and reprimanded for his conduct in the “Scorpio” investigation. Due to Harry entering “Scorpio’s” living quarters without a warrant and “Scorpio’s” coerced confession, the district attorney is not filing any charges against the killer and he will be released. Harry takes issue with the district attorney and states that the law is wrong when is protects the killer and not the victim. Outraged, Harry begins is own personal investigation against “Scorpio” by stalking him around the city on his own time. To shake Harry off his tail, the sadistic “Scorpio” pays someone to beat him severely so that he can publicly claim police brutality against Harry.

While Harry’s supervisors order Harry to leave “Scorpio” alone, the killer steals a handgun from a store owner and hijacks a school bus with several children on board. He contacts the police with another ransom demand that includes a plane to make his getaway. Against orders, Harry tracks the killer and jumps onto the bus to save the kids. “Scorpio” runs from the bus without any of the kids and Harry pursues him through a quarry. In the ultimate confrontation, Harry uses the same line that he used on the bank robber earlier in the film. Except this time, he is not bluffing. When “Scorpio” reaches for his gun, Harry shoots the killer dead. Disgusted with the system, Harry takes out his Inspector’s badge and throws it into the same pond that “Scorpio’s” body floats in and then walks away.