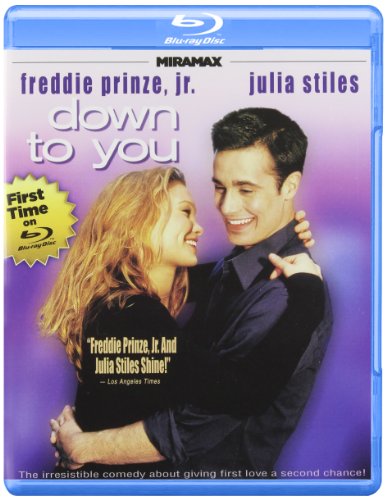 Down To You [Blu-ray]

Echo Bridge Entertainment has announced that the romantic comedy Down To You is finally coming to Blu-ray this March.  The film is written and directed  by Kris Isacsson and stars Freddie Prinze Jr., Julia Stiles, Selma Blair, and Shawn Hatosy.  Down To You hits stores on Blu-ray on March 26, 2013.

This light-hearted romantic comedy tells of love sought, found, lost, and found again, revolving around the lives of two college students in New York City.  Sophomore Al Connelly (Prinze Jr.) meets the girl of his dreams, freshman Imogen (Stiles), and true love abounds.  The two engage on a whirlwind courtship–they pick a song, eat a cake together, even make love.  But Imogen’s fear of lost youth causes her to push away from Al, and they go their separate ways.  Al attempts to rebound from the relationship, determined to forget Imogen, and he goes to desperate measures to do so.  The story is told from the points of view of both Al and Imogen.  Ashton Kutcher, Rosario Dawson, and Henry Winkler co-star in the film.

Down To You was released in January 2000 and grossed over $20 million at the box office.

Here is the trailer for Down To You.

Disclaimer: Affiliate links are contained in this post. This means when you click a link, and purchase an item, Movie House Memories will receive an affiliate commission. Advertisers and Affiliate Partnerships do not influence our content. See our Terms of Use about the inclusion of affiliate links on this site for more information.
January 15, 2013
1 minute read
Show More
Back to top button
Close
Close