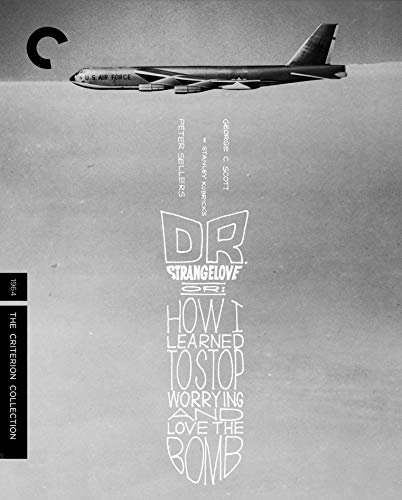 Dr. Strangelove, Or: How I Learned to Stop Worrying and Love the Bomb (The Criterion Collection) [Blu-ray]

On June 28, 2016, the Criterion Collection released Dr. Strangelove or: How I Learned to Stop Worrying and Love the Bomb on Blu-ray. Stanley Kubrick directed the film starring Peter Sellers, George C. Scott, and Sterling Hayden.

‘Dr. Strangelove or: How I Learned to Stop Worrying and Love the Bomb’ Movie Synopsis

In Dr. Strangelove, when the U.S. Air Force General, Jack Ripper, goes mad, he orders his bomber wing to destroy the Soviet Union. He suspects that the communists are conspiring to pollute the precious bodily fluids of the American people. As the U.S. president meets with his advisors, the Soviet ambassador tells him that if nuclear weapons hit them, the assault will trigger their Doomsday Machine; thus destroying all plant and animal life on Earth. Now, it’s a rush against time as clashing personalities play a sinister game of Chess with innocent lives in the balance.

Read the full summary, listen to our film review, and our Criterion review.