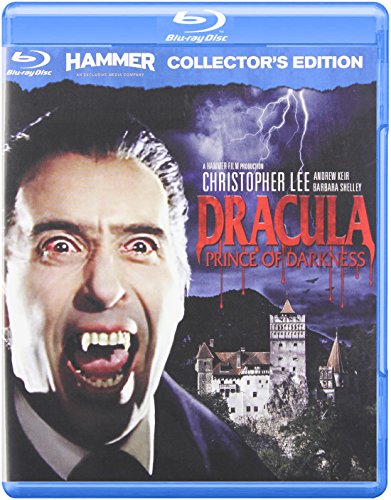 Millennium Entertainment has announced that they are adding the horror film Dracula: Prince of Darkness to their upcoming slate of Blu-ray releases. The film is directed by Terence Fisher and stars Christopher Lee, Barbara Shelley, Philip Latham, Andrew Keir, and Francis Matthews. Dracula: Prince of Darkness will be for purchase available online and in stores beginning on September 3.

In this sequel to Dracula (aka Horror of Dracula), four English tourists are holidaying in the Carpathians when they meet the unconventional Father Sandor (Keir) at an inn. He warns them to avoid the local castle if they value their lives, but the next day the quartet find themselves stranded in the mountains after their driver abandons them. When a driverless carriage arrives they board it, intending to travel to the nearest village. However, the carriage instead takes them to the very castle which Sandor warned them against, where they are welcomed by Klove (Latham), sinister manservant of Count Dracula (Lee). Dracula: Prince of Darkness was released in January of 1966.

Disclaimer: Affiliate links are contained in this post. This means when you click a link, and purchase an item, Movie House Memories will receive an affiliate commission. Advertisers and Affiliate Partnerships do not influence our content. See our Terms of Use about the inclusion of affiliate links on this site for more information.
June 6, 2013
392 1 minute read
Show More
Subscribe
Login
0 Comments
Inline Feedbacks
View all comments
Most Recent Posts
Facebook Twitter LinkedIn Tumblr Pinterest Reddit
Back to top button
Close
wpDiscuz
0
0
Would love your thoughts, please comment.x
()
x
| Reply
Close