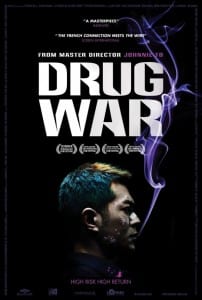 Variance Films has released a new trailer for their upcoming crime film Drug War. The film is directed by Johnnie To and stars Louis Koo, Honglei Sun, Yi Huang, and Michelle Ye. Drug War is scheduled for a limited theatrical release on July 26, 2013.

Manufacturing just fifty grams of meth in China will earn you a death sentence, and Timmy Choi (Koo) has manufactured tons of it. After a violent lab accident, he’s in the custody of Captain Zhang (Sun), and now he has only one chance to avoid execution: turn informant and help Zhang’s undercover team take down the powerful cartel he’s been cooking for. With the uneasy allies forced to compress months of police work into just 72 sleepless hours, things begin to spin wildly out of control, and it becomes unclear whether the cop or the criminal truly has the upper hand in master director Johnnie To’s puzzle box of a crime thriller.

Trailer for Drug War  courtesy of The JoBlo Movie Network