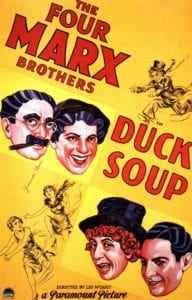 Although many thought Duck Soup was something a box office disappointment to when it was released, it was still the sixth-highest-grossing film of 1933. However, it did not do as well as Horse Feathers, but history has been kind to the film. In retrospect, many critics consider this film to be the greatest of the Marx Brothers’ films. So much so, that in 1990, the United States Library of Congress added Duck Soup to the National Film Registry.

Duck Soup begins with Mrs. Teasdale insisting her bankrupt country of Freedonia appoint Rufus T. Firefly leader before she lends the government any more money to keep it from collapsing.

Freedonia’s neighbor, Sylvania wants to annex the poor country through a revolution. Their ambassador, Trentino, sends two spies, Chicolini and Pinky, to Freedonia to get dirt on Firefly. Meanwhile, Trentino tries to seduce Mrs. Teasdale to gain access to her wealth.

Chicolini and Pinky are so inept, they can’t get any info on Firefly, but Firefly is just as inept, and he gives the Sylvanian spies jobs.

Soon Firefly’s secretary, Bob Roland, suspects Trentino isn’t on the level, and recommends Firefly get rid of the man by insulting him. Firefly and Trentino swap insults, and then Firefly slaps the man. This nearly brings the two countries to war.

By this time, Firefly too is wooing Mrs. Teasdale to get her money, and this adds to the tensions of the two men. When Trentino learns Freedonia’s war plans are in Mrs. Teasdale’s safe, he orders Chicolini and Pinky to steal them. However, the two are still inept, and Firefly quickly catches them.

The government puts the two on trial, but everything comes to a halt when Freedonia and Sylvania declare war on each other. From there, the movie devolves into chaos. Who wins the war? You will just have to see for yourself to find out.

Duck Soup is a combination of the utter silliness and quick wit you’d expect from a Marx Brothers’ film. Their version of the mirror gag—the one where Pinky dresses as Firefly, and pretends to be Firefly’s reflection in a missing mirror—is a comedic classic.

Duck Soup is a timeless comedy that gets better with age, and is MHM’s April pick for the 12 Retro Movies Everyone Should See In 2017.

Rufus T. Firefly is the president of a bankrupt country called Freedonia. He soon declares war on neighboring Sylvania over the love of wealthy Mrs. Teasdale.