In Earth Girls Are Easy, three aliens traveling space receive a broadcast showing hairless human females. These shapely girls turn them on, and they track the broadcast’s signal to Southern California on Earth. Down in Southern California, Valerie Gail tries to seduce her fiancé, Dr. Ted Gallagher, whom she thinks she’s losing. She catches him cheating on her with a nurse first though.

She kicks him to the curb, and refuses to see him again. Soon, the aliens’ spaceship crash lands in Valerie’s swimming pool, and she brings them into her home. There, the aliens prove learn our language from television, and head out to the LA Club scene. Wackiness ensues in this goofy comedy that proves Earth Girls Are Easy. 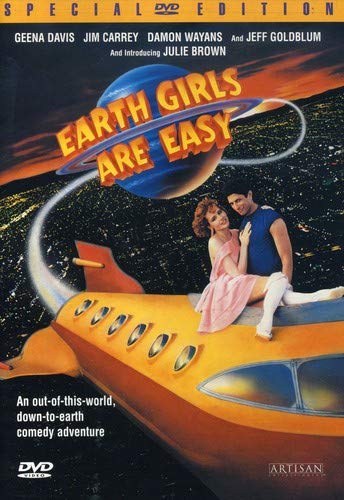 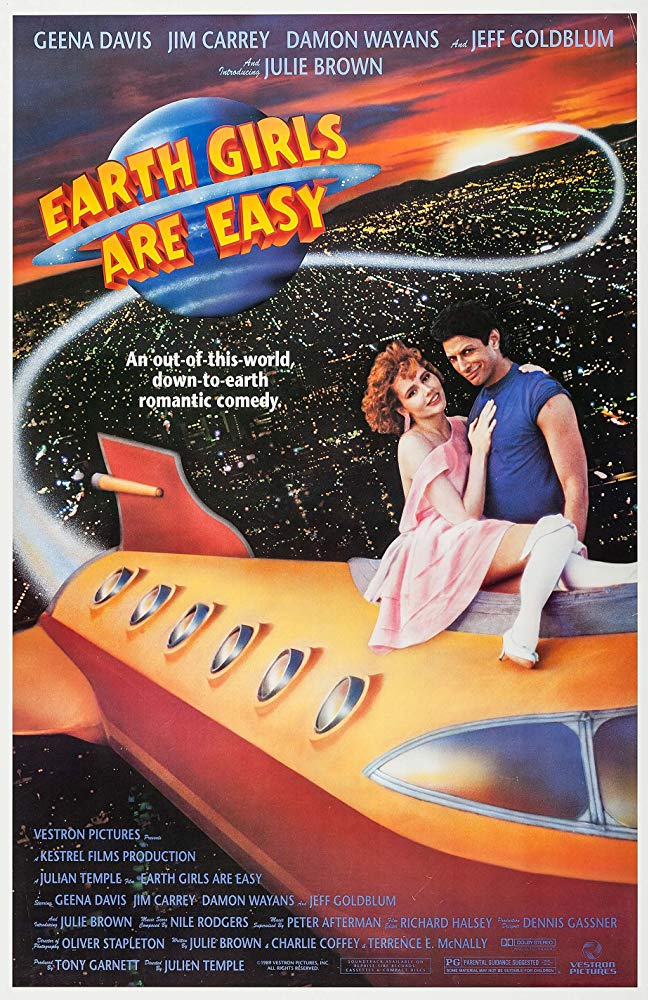 Earth Girls are Easy begins in outer space with three furry, color-coded aliens piloting a ship—Mac is blue. Zeebo is yellow, and Wiploc is red. They’ve been traveling for so long, that it’s been quite some time since they’ve been with a woman. When their ship receives an unknown broadcast, the three are immediately smitten with the hairless, shapely creatures that come across the screen. Once they discover that the broadcast came from Earth, they set off for Southern California.

Soon we meet the valley girl, Valerie Gale. She works as a manicurist at the Curl Up & Dye hair salon. While she’s engaged to the sexy doctor, Ted Gallagher, she’s long since been unhappy with his lack of sexual attention towards her. So she decides to seduce him, and dresses herself up in a white corset, suspenders, underwear, stockings and pink high heels—not that I was looking that close. However, she catches him in the act of cheating on her with his nurse, and she kicks him out of her house—never wanting to see him again.

The next day, while Valerie’s out sunbathing, the aliens’ spaceship crash lands in her swimming pool. All things considered, she’s fairly calm about the whole situation. She befriends the space aliens, and calls her pal Woody to drain the pool so they can get their spaceship back to flying condition. Meanwhile, she brings the boys into her home. While there is a hilarious language barrier at first, the aliens watch TV, and quickly absorb American culture and language.

Unfortunately, the guys are head to toe furry, and it’s brightly-colored fur too. So Valerie takes them to the salon where her friend, Candy Pink, gives them a quick shave and dye job. Turns out the boys are quite attractive looking if you’re into alien kink.

Time to head out and party in all the hot Los Angeles nightclubs. Their strong bodies and incredibly athletic tongues quickly make them the envy of all the lovely ladies. Valerie and Mac have the hots for each other, and once back at her place, they discover they are anatomically compatible. The two make sweet, sweet love. I’m pretty sure that tongue came into play too.

A day at the beach

The next day, both the pool and Mac are drained. Zeebo and Wiploc work on repairing the spaceship when Woody shows up to offer to take them to the beach. The three head out, but the boys manage to accidentally hold up a convenience store along the way. Zeebo and Wiploc take off down the wrong side of the freeway, in reverse, with the police in hot pursuit. Once Mac finds out his buddies are in trouble, he goes to help. Unfortunately, he and Woody wind up in jail on a case of mistaken identity. Wisely, Valerie smashes the police vehicle so she too can go to jail with Mac.

Meanwhile, the police pursuit has ended in a crash. After the ambulance takes Zeebo and Wiploc to the emergency room, Ted examines them. He discovers they have two hearts, and starts getting delusions of grandeur from the fame this discovery will give him.

By now, Valerie and Mac have elude the police, and make it to the emergency room where they disguise themselves as a doctor and a nurse. They are able to convince Ted he’s just delusional. They all make it back to Valerie’s house where repair work continues on the spaceship.

Meanwhile, Valerie and Ted reconcile, and make plans to elope to Las Vegas. While Mac’s heartbroken, he accepts his fate, and prepares the spaceship for take-off. When Valerie comes out to say goodbye, Ted follows. Once he spots the spaceship, he tries to call the authorities. As she tries to prevent him from doing so, she realizes that Mac is the one she truly loves. She gets into the spaceship, and they take off to infinity and beyond.