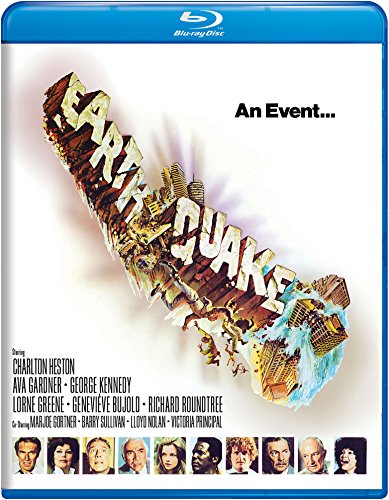 Heston leads an all-star cast in an epic film about ordinary citizens who must come together in the face of an unstoppable natural disaster. When the most catastrophic earthquake of all time rips through Southern California, it levels Los Angeles and sends shockwaves through the lives of all who live there. Now strangers must become heroes as the city struggles to get to its feet before the next terrifying aftershock hits.

Earthquake was released in November of 1974 and grossed over $79 million at the box office. The film was nominated for four Academy Awards (Best Cinematography, Best Editing, Best Production Design and Best Sound Mixing), winning Best Sound and receiving a Special Achievement Academy Award for visual effects.

The Blu-ray release of Earthquake is presented in 1080p with a DTS-HD Master Audio 5.1 surround track. No additional special features will be included with the Blu-ray.

Disclaimer: Affiliate links are contained in this post. This means when you click a link, and purchase an item, Movie House Memories will receive an affiliate commission. Advertisers and Affiliate Partnerships do not influence our content. See our Terms of Use about the inclusion of affiliate links on this site for more information.
May 7, 2013
600 1 minute read
Show More
Subscribe
Login
0 Comments
Inline Feedbacks
View all comments
Most Recent Posts
Facebook Twitter LinkedIn Tumblr Pinterest Reddit
Back to top button
Close
wpDiscuz
0
0
Would love your thoughts, please comment.x
()
x
| Reply
Close