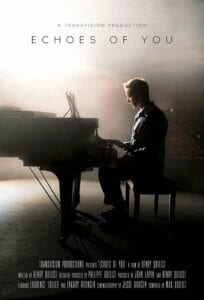 2019’s Echoes of You is about an aspiring classical pianist who finds his greatest fulfillment in an unlikely place. Henry Quilici writes and directed the film starring Laurence Fuller and Zakary Risinger.

“Echoes Of You” at Newport Beach Film Festival

I was very happy that Echoes Of You had the opportunity to screen at Newport Beach Film Festival because of the whale watching community and conservation in Newport Beach, I learnt recently that in the echo of a whale, there is recorded, in the textures and every scratch of its tone; a map of everywhere it has been, its social groups, how it felt about its environment and all the other creatures surrounding. That is just like us, and the echoes that we as people leave on others. read the full article

Echoes Of You – Open Letter with Christopher Lyndon Gee

During my first lead role in an amateur theatre production of Shakespeare’s the Tempest when I was 13 years old, a well established avant-garde conductor called Christopher Lyndon-Gee came to the performance, after the show he walked out and shook my hand, ‘he said you truly do have the natural gift’. It was one of the few moments I can remember which set my course as an actor, it was a fuse which was lit early on with a determination that has never dulled. He later wrote my letter of recommendation for Bristol Old Vic Theatre School. read the full article

The Indie Spotlight highlights the projects of smaller budget film makers. The MHM Podcast Network does not receive payment for featuring these projects on our website. The views and opinions expressed on any project are those of the filmmakers, producers and/or the persons creating and/or appearing in the film. Those opinions do not reflect the views and opinions of the MHM Podcast Network and Fuzzy Bunny Slippers Entertainment LLC. Want your film project to appear on the Indie Spotlight? Send us an email.