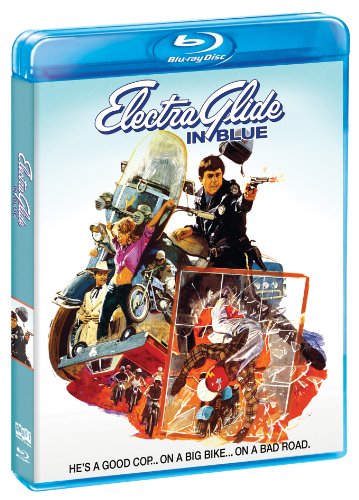 Independent distributors Shout Factory have announced that they will bring to Electra Glide in Blue to Blu-ray this summer. The film is directed by James William Guercio and starred Robert Blake, Billy Green Bush, Mitch Ryan, and Jeannine Riley. Electra Glide in Blue will be available for purchase online and in stores across the nation on June 4th.

In the film, the only thing good-hearted motorcycle cop John Wintergreen (Blake) wants is to become a detective…to wear a big Stetson, smoke fancy cigars and be paid to think. So when he stumbles upon a dead body, he takes on the case-and proves his stuff! But as soon as he’s promoted, the corruption he must tolerate makes the Stetson not fit so well and the cigars not taste so good. Forced to confront his own disillusionment, Wintergreen heads out on his bike, the Electra Glide, where he makes another shocking discovery that could cost him his life.

Electra Glide in Blue was released in October of 1973 and was nominated for one Golden Globe Award for Best Actor (Robert Blake).

Disclaimer: Affiliate links are contained in this post. This means when you click a link, and purchase an item, Movie House Memories will receive an affiliate commission. Advertisers and Affiliate Partnerships do not influence our content. See our Terms of Use about the inclusion of affiliate links on this site for more information.
May 4, 2013
298 1 minute read
Show More
Subscribe
Login
0 Comments
Inline Feedbacks
View all comments
Most Recent Posts
Facebook Twitter LinkedIn Tumblr Pinterest Reddit
Back to top button
Close
wpDiscuz
0
0
Would love your thoughts, please comment.x
()
x
| Reply
Close