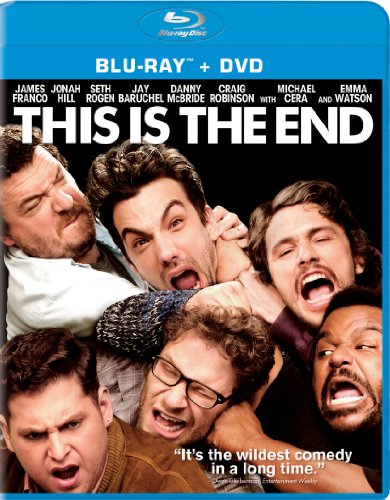 Sony Pictures Home Entertainment has announced the addition of the comedy This Is The End to their upcoming slate of Blu-ray releases. The film is directed by Evan Goldberg and Seth Rogen. This Is The End stars the comedy talents of Rogen, James Franco, Jonah Hill, Jay Baruchel,Craig Robinson, and Danny McBride. This Is The End will be available in a combo pack online and in stores beginning on October 1st.

This Is The End tells a story of a group of celebrities who are attending a party at James Franco’s house, who are suddenly faced with the realities of the apocalypse. Most of the actors will be playing themselves in the film. This Is The End will also feature appearances by Michael Cera, Jason Segel, Emma Watson, Paul Rudd, Mindy Kaling, and Rihanna.

The This Is The End Blu-ray will include several special features, including:

Disclaimer: Affiliate links are contained in this post. This means when you click a link, and purchase an item, Movie House Memories will receive an affiliate commission. Advertisers and Affiliate Partnerships do not influence our content. See our Terms of Use about the inclusion of affiliate links on this site for more information.
September 26, 2013
2 minutes read
Show More
Back to top button
Close
Close